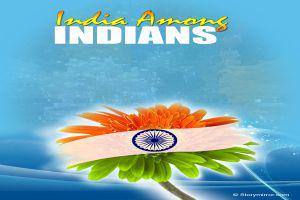 Clear blue sky or the fragrance of mud.

INDIA is not just a country but an emotion in itself and it still does not fail to amuse the scholars that how can a country with such a large variety of nature stands united.

It is not just restricted to a geographical diversity but is also one of the very few countries where a number of religions exist. What makes it different from the other nations is how every religion preaches a single faith , a single power and a single life in an invisible manner.

While some may believe in a sculpture made by another human being himself, others believe in the sceneric beauties possessing a holy power -  the river Ganges, Himalayan mountains etc. are considered sacred. There might be a number of holy books being worshipped by people of different religions such as the Ramayana, Mahabharata, The Holy Bible or the Quran. The Indian beauty speaks for itself when all the scripts come together and comprehend the same idea much like a vicious circle starting from one point and coming back to the same point from where it started.

Unity in diversity, the phrase is very commonly used to describe the country India but what does unity mean in the most literal sense? It means ‘joined as a whole’ and diversity is well described by India’s rich culture and heritage. Even though we’ve entered the mordernisation era as a technique for achieving worldwide development, apart from one’s faith, what cannot be taken away from the heart of an Indian is its culture. Customs and traditions may vary according to one’s religion by birth but culture is solely based upon one’s thoughts and believes and his community.

If we come to talk about festivals, Indians celebrate all the festivals regardless and with utmost regard and enthusiasm where family plays a crucial role in every Indian household, the customs and traditions followed in a house by their ancestors are carried in the same manner forming a legacy of its own.

On the other hand, the fact that emotions play a major role in the Indian scenario cannot be denied. The Indian freedom struggle which is a historical world mark wouldn’t have been of the same stature of an emotional connect, a patriot heart and a helping mind didn’t exist in our freedom fighters.

Coming back to times now, somewhere deep down amidst the speed of industrialisation, social media and cut throat competitions, the Indian-ness amongst the Indians in and outside the nation has been lost. Every year, a large chunk of people migrate from their native country India to places abroad due to better career opportunities and secure future. The feeling of rather presenting ones own country on a global level doesn’t exist any longer.

We talk about Starbucks and Burger King coming to India. Do we remember Rajasthan? Full of palaces and forts-pink, yellow and white, built by the Rajput kings long ago?

Hersheys and Cadbury? Go to Calcutta , the sweet air would fill your heart along with every shop offering you Sandesh and Rasgullas.

Lush green forests of Africa might be a treat to the eye but the Tea gardens of Assam along with graceful Bihu dancers never fail to leave you spellbound.

Such is the power of my country, our country- India.