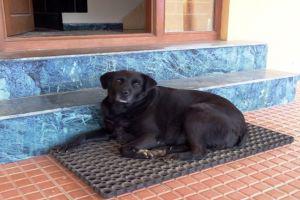 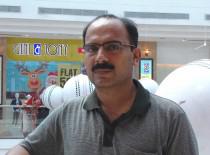 After our one month stay in Kerala, mum and I returned to our beloved hometown, Ooty. Winter had set with the surrounding trees looking withered and its roots clothed with fallen leaves. Misty mountains danced with the wind and house sparrows fluttered all around.

“Oh! I just love the cold,” said mum, happy to be back home.

“Look at the hills flooded with fog, mum. We’re in paradise once again. Lovely, isn’t it?” I asked.

Before entering, I noticed the dry plate outside, which was kept for my neighbor’s dog, Tina. I looked around for a while, filled the plate with water and went inside, wondering if she was aware that we had returned. All I knew about Tina was that she often stayed with a tall, slim gentleman who resided somewhere uphill near our house. The owner had discarded this poor dog and left Ooty years back. How could he or anyone even think of doing it to this old helpless dog? It was sheer cruelty. After unpacking my clothes, I had a bath, changed and went downstairs for tea. It was getting colder, more like the beginning of winter. Dusk slowly crept in as the sun sank beneath distant hills.

A week passed by, but there was no sign of Tina. Few other dogs had entered our area hunting for food, chasing the shrewd brown cat, barking at cows, exploring this new territory.

“No idea. Guess someone has to tell her that we are here. But who is there to do this for us?”

“Him,” said Freddy, pointing at a tall familiar person coming down the steep road ascending to our gate. It was the same person who was taking care of Tina. I sprang from the steps and held my gate, waiting for him to look at me. Getting impatient, I waved till he caught the sight of me.

“Hi! When did you return?” he asked with his hands in the pockets a usual.

“Haven’t seen her for more than a month. Was in Kerala. Can you please bring her here sometime?” I pleaded.

“Sure, boss. I very well know that she loves you more than anyone else. Wait till evening or tomorrow. She’ll be here,” he replied, asking me not to worry.

“Thanks a ton,” I said and looked at Freddy.

“How can I be patient?” I thought. “Tina used to come every week without failure. Now it’s been more than a month. I wish she was here.”

Hours dragged by like minutes. I sat out after lunch watching the distant clouds joining each other and creeping in. I sat out again after tea. Smoky hills looked frozen as the winter hit the ground. Tina was nowhere in sight. Dark was the night once again. Shivering in the cold, I closed the front door, had dinner and went straight to bed brooding.

Next morning, at about 6.30, I heard her bark. It was Tina. That was a bark I could recognize from any distance. Yes. It was Tina. I hurried downstairs, swung the curtains aside and opened the door, waiting for her to jump on me. But to my utter disappointment, she was looking weak and exhausted. She slowly got up, her tiny tail wagging like a fluttering leaf, and came up to me. I patted her for some time, calling out her name again and again. Mum came after a while with Tina’s plate of bread and milk.

Mum nodded and remained quiet. Freddy came after a while and beamed with joy.

“Wow! Your friend is back, Rohit. Tina is finally back,” he said.

“That’s because of the winter cold. Naturally, all beings become a little weak due to body pain at this time of the year,” he said, trying to comfort me.

“You’re right, Freddy. I didn’t think from that point of view. So are you sure she’ll be fine later?” I asked, still having my doubts.

“Of course. Don’t get worried about this. Take a look at Peter’s dog. It sleeps 24 hours due to this cold. By February end or so, it’ll be active once again.”

I smiled at Freddy as Tina licked her plate and sat in the sun once again. She growled as other dogs passed by, but didn’t chase them like before. She couldn’t. Just couldn’t. The dog was growing old. That was the truth. The thought of losing Tina made me remain quiet for hours. When it was noon, she drank water and went to sit outside in the sun again unable to withstand the cold.

“Let her sleep here if she wants, son,” said mum with her hand on my shoulder. “As you said, she looks weak.”

A few hours later, Tina left, knowing well that her owner would also be waiting for her. She was back the next morning before 7. Mum took very good care of her. I did my best to keep her happy by talking to her often, whistling, scratching and patting her. A week or two went like this. Finally, she stopped coming. I noticed her owner looking at our compound daily while passing by. That gave me the message that Tina, my faithful old dog, had withered into the soil once and for all. How I miss her!