She was terrified and was feeling lost. Sweat was dripping from forehead making its way through out the body without a barrier. Her face was masked with sadness, with eyes blocking ocean of tears. Her legs were trembling with weakness as she was standing in front of a silent river which was marking the end of the day. She felt as if it was luring her silently like a siren. She felt as if it was pulling her towards the waves like a magnet. Her mind was crowded with thoughts pushing each other with no space, unlike that silent river. Thoughts that made her feel alone, thoughts that made her feel lost, thoughts that made her feel lifeless. What was she doing there? Was she in her right senses? Did she lose her way? Did she lose someone close? Did she...?

Throughout her life, she always felt the same emotion. An emotion which bounded to her body and soul with out leaving her. What was that emotion anyway?

But how...? What was planning to do near the river which was still screaming her name in silence...? It was luring her into its trap... But will she fall? 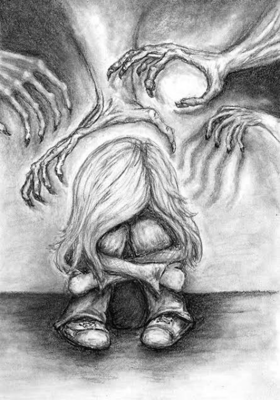