Once there lived a girl named Cinderella with her stepmother and stepsisters. Her mother died when she was a little girl. She lived with her ‘stepmother’ who would use her as a maid to do all the household work.

She would work tirelessly all day long, with hardly any time to rest.

From dawn to dusk she would be on her toes; cooking meals, cleaning, washing keeping everything spotlessly clean. But doing all the work never pleased her so-called stepsisters and stepmom. They would never resist taunting the poor soul.

One day a soldier came to make an important announcement and guess what? There was a party going to take place for a special task to find a suitable bride for the Prince. And all the young, beautiful ladies were invited. Oh! What a wild chase it seemed! All the beautiful ladies were rushing to select beautiful gowns, dancing shoes, hairstyles, makeup and so on…

And who would like to miss this opportunity? Yes, an opportunity to become a princess! How I wish I could be a princess, was the dream everyone was dreaming of…

Poor Cinderella had even more work to handle. She had to make two new gowns for her sisters. In her head was spinning a question. “When will I make my gown?” In her tension, she just whispered, “When can I?”

Her stepmother entered just that very moment and yelled, “When can you? What?”

Cinderella slowly replied, “Make my dress for the party.”

Just then her stepmother gave her a strong shouting saying she would not be going for the party.

Cinderella quietly went in sighing to her faith.

Just then her sisters and stepmother boarded a carriage and left. Cinderella saw them disappearing down the street and said, “How I wished I could go for the party.” The moment she said this it seemed as if someone waved a wand, and there appeared a fairy.

Astonished at her sight she asked the fairy, “Who are you?”

The fairy replied, “I am Fairy Godmother. I have seen what you’ve been going through. I will grant you your wish.

Cinderella replied, “How is it possible Godmother fairy? I don’t have a gown? Just look at me, do you think I should go to the party this way?”

Godmother fairy just waved her wand and in a second stood Cinderella wearing a beautiful gown, looking enchanting and beautiful decked in a high bun with golden ribbon.

Cinderella could not believe her eyes. Another wave of the wand, and there stood a beautiful carriage with a rider and four white horses.

Come on, hurry up said Godmother fairy. This is gonna last till midnight aand then everything will be back to normal. Cinderella promised Godmother fairy to be back before midnight. And then she left.

At the party, the queen noticed the prince quiet and lonely. She asked him what was the matter, but he reply. His mother asked him to look around at all the maidens and choose one for himself.

Just then he saw Cinderella standing at the door. He was lost in her beauty. He was wondering from where did such a beautiful girl land from.

Prince walked to Cinderella and asked her to dance. Both of them were dancing together. Her step sisters were jealous of her.

Just then the clock struck. Cinderella remembered her promise to the Godmother fairy and started moving towards the exit. Prince didn’t know why she was just rushing away.

He tried to follow her but Cinderella just turned back and said, “I need to go.” But the clock kept ringing and he could not hear her.

Just then her glass slipper fell off her foot on the stairs. She just said her last goodbye and left. Prince just picked up the glass slippers and said, “This is all that is left, as a remembrance of her.”

He realized that it would fit only the one who wore it. It was the only source he could find his love lady and then ask her hand in marriage.

His hunt for the young lady started. He went to each and every house looking out for Cinderella. At last he reached her house.

Cinderella’s step sisters saw him coming to their house and were filled with joy. Their mother asked them to dress up and get ready. She just crossed her fingers and prayed that the slipper would fit one of her daughter’s feet.

Both hers daughters tried but failed. Just then the Prince asked, “Is there anyone left to try?” The step mother hurriedly came forward and said no.

But one of the soldier interrupted saying, “There is another lady left here Sir.”

The Prince called the young lady. Cinderella came in, slowly she put her foot in the glass slipper. It fitted her just perfect, and why not? It was her very slipper.

The Prince looked at her and said, “I knew it was you.” He took her along with her without even seeing her dress or her state. He had fallen for her. They got married and lived happily ever after…

Moral of the story: Destiny takes you to the place you belong to. No one can ever take away what belongs to you… 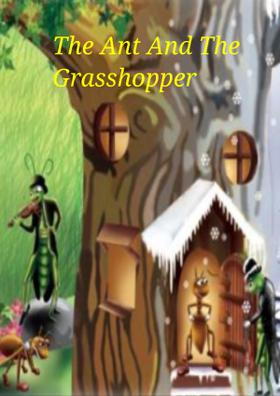