I had just finished writing my school projects. Feeling stiff and sore all over, I decided to go for a run in the park. As I descended the steps to the ground floor, I heard screams. Shocked, I rushed towards the source of the screaming. I was panting heavily by the time I reached the crowd of milling people, and only then did I realize why I was so short of breath. The esteemed one-stop shop for all essentials, Nature's Basket, had caught fire.

Never had I seen something so destructive yet so enrapturing. The flames leapt from the awning hanging above the store's entrance to the rows of sacks filled with fresh food items. Charred pieces floated hay-wire in the air. I was yanked out of my stupor by screams. With a sinking feeling, I realised they were coming from inside the store. My instincts took over immediately. I ran to the store a few blocks down and yanked the fire alarm down. I called out to some bystanders to call the police, the fire engine, and the ambulance. My parents had already come down. I grabbed a megaphone from the nearby toy store and dictated out all the rules that we had been taught in school about combatting such situations to people inside as well as outside Nature's Basket.

Some of the stronger adults dived inside the store, wet napkins wrapped around their faces. I stayed behind as I knew it was best to let the adults handle this. A few moments later, some people ran out of the store, clutching their throats and gasping for air. I was glad to see they all had wrapped wet napkins around their faces too, which helped them to stay conscious despite the thick smoke. Almost immediately, the fire brigade arrived and doused the fire with their powerful water pipes. The badly injured were taken away by ambulance to be admitted to the hospital. The police came to investigate the cause of the fire. They told us that a burning matchstick had fallen on a gas cylinder, causing it to burst and cause an explosion. No sooner had the fire been extinguished by the fire engine got another call. My parents got in their car and told everyone to clear the road as the fire engine zoomed away, its ringing siren clearing out a path.

When we returned home, I saw my parents smile widely, and I felt a great sense of pride in what I had done. A few days later, I was honoured by the Governor of Maharashtra for my quick thinking which helped save everyone's lives and prevented any casualties. As I looked out at the people cheering for me, I saw some of the people I had helped save from the fire look at me with a smile on their faces, and I couldn't have been happier that I had done what had to be done. 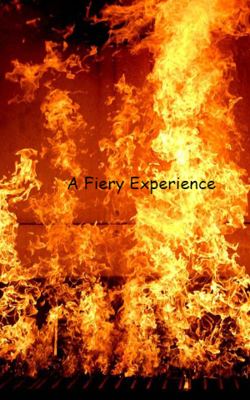