The mother put down her work for an instant and looked out of the window. But it so happened that the sun--for this was one of the shortest days of the whole year--had sunken so nearly to the edge of the world that his setting shine came obliquely into the lady's eyes. So she was dazzled, you must understand, and could not very distinctly observe what was in the garden. Still, however, through all that bright, blinding dazzle of the sun and the new snow, she beheld a small white figure in the garden, that seemed to have a wonderful deal of human likeness about it. And she saw Violet and Peony,--indeed, she looked more at them than at the image,--she saw the two children still at work; Peony bringing fresh snow, and Violet applying it to the figure as scientifically as a sculptor adds clay to his model. Indistinctly as she discerned the snow-child, the mother thought to herself that never before was there a snow-figure so cunningly made, nor ever such a dear little girl and boy to make it.

"They do everything better than other children," said she, very complacently. "No wonder they make better snow-images!"

She sat down again to her work and made as much haste with it as possible; because twilight would soon come, and Peony's frock was not yet finished, and grandfather was expected, by railroad, pretty early in the morning. Faster and faster, therefore, went her flying fingers. The children, likewise, kept busily at work in the garden, and still, the mother listened, whenever she could catch a word. She was amused to observe how their little imaginations had got mixed up with what they were doing and carried away by it. They seemed positive to think that the snow-child would run about and play with them.

"What a nice playmate she will be for us, all winter long!" said Violet. "I hope papa will not be afraid of her giving us a cold! Sha'n't you love her dearly, Peony?"

"Oh yes!" cried Peony. "And I will hug her, and she shall sit down close by me and drink some of my warm milk!"

"Oh no, Peony!" answered Violet, with grave wisdom. "That will not do at all. Warm milk will not be wholesome for our little snow-sister. Little snow people, like her, eat nothing but icicles. No, no, Peony; we must not give her anything warm to drink!"

There was a minute or two of silence; for Peony, whose short legs were never weary, had gone on a pilgrimage again to the other side of the garden. All of a sudden, Violet cried out, loudly and joyfully,--"Look here, Peony! Come quickly! A light has been shining on her cheek out of that rose-colored cloud! and the color does not go away! Is not that beautiful!"

"Yes; it is beau-ti-ful," answered Peony, pronouncing the three syllables with deliberate accuracy. "O Violet, only look at her hair! It is all like gold!"

"Oh certainly," said Violet, with tranquillity, as if it were very much a matter of course. "That color, you know, comes from the golden clouds, that we see up there in the sky. She is almost finished now. But her lips must be made very red,--redder than her cheeks. Perhaps, Peony, it will make them red if we both kiss them!"

Accordingly, the mother heard two smart little smacks, as if both her children were kissing the snow-image on its frozen mouth. But, as this did not seem to make the lips quite red enough, Violet next proposed that the snow-child should be invited to kiss Peony's scarlet cheek.

"There! she has kissed you," added Violet, "and now her lips are very red. And she blushed a little, too!"

Just then, there came a breeze of the pure west-wind, sweeping through the garden and rattling the parlor-windows. It sounded so wintry cold, that the mother was about to tap on the window-pane with her thimbled finger, to summon the two children in, when they both cried out to her with one voice. The tone was not a tone of surprise, although they were evidently a good deal excited; it appeared rather as if they very much rejoiced at some event that had now happened, but which they had been looking for, and had reckoned upon all along.

"Mamma! mamma! We have finished our little snow-sister, and she is running about the garden with us!"

"What imaginative little beings my children are!" thought the mother, putting the last few stitches into Peony's frock. "And it is strange, too that they make me almost as much a child as they themselves are! I can hardly help believing, now, that the snow-image has really come to life!"

"Dear mamma!" cried Violet, "pray look out and see what a sweet playmate we have!"

The mother, being thus entreated, could no longer delay to look forth from the window. The sun was now gone out of the sky, leaving, however, a rich inheritance of his brightness among those purple and golden clouds which make the sunsets of winter so magnificent. But there was not the slightest gleam or dazzle, either on the window or on the snow; so that the good lady could look all over the garden, and see everything and everybody in it. And what do you think she saw there? Violet and Peony, of course, her own two darling children. Ah, but whom or what did she see besides?

Why, if you will, believe me, there was a small figure of a girl, dressed all in white, with rose-tinged cheeks and ringlets of golden hue, playing about the garden with the two children! A stranger though she was, the child seemed to be on as familiar terms with Violet and Peony, and they with her, as if all the three had been playmates during the whole of their little lives. The mother thought to herself that it must certainly be the daughter of one of the neighbors, and that, seeing Violet and Peony in the garden, the child had run across the street to play with them. So this kind lady went to the door, intending to invite the little runaway into her comfortable parlor; for, now that the sunshine was withdrawn, the atmosphere, out of doors, was already growing very cold. 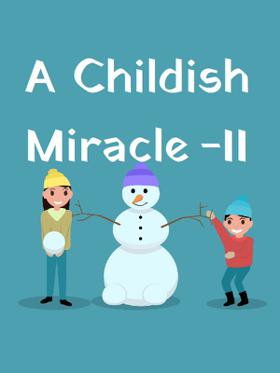