She Has A Man Now

She Has A Man Now

Dream she had dreamt

Of her life with her family,

Her husband by her side

And with the infant they had.

She dreamt it prudently as it

But it was unperceived

What life was about to unfold.

Her husband left, on her own

With a child of only ten.

She drenched herself in

Tears of blue and the downcastness.

She found herself in between

Dreadful and upstream course ahead.

Sooner or later she had to decide

How she will fight alone.

Yet she showed courage,

Actuate herself and accept her fate.

She vowed herself that she will

Made him a man she dreamt in her dream.

She never complained as he made mistakes

However she cautioned on what path

He might be moving. It was a day or

It was night, she couldn’t differ

Because of one thing that always

Beating his drum in the sky,like

Volcanic eruption in Sakurajima, That, “How will she fight alone”

Through all the ups and the downs

Of her life now

she had to fight alone, but hey!

She did it with the

Excellency and pride no matter

How far she had to go.

Scars she got from all

Those people who tried to pushed her down

While she tried to stand and fight,

Now she counts them as her achievement

Since she made her all the way through.

Today she made her son as the

Man she dreamt in her dream.

I believe one day, her son,

The man she made will

Repay her debts with glory and gratitude. Be A Free Soul Break Away The Boundation... You Can Achieve It... 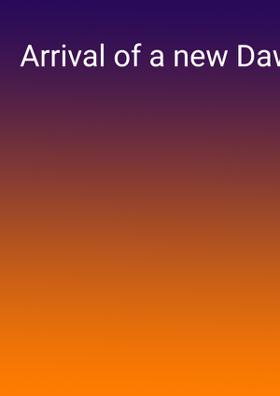 Arrival Of A New Dawn A Festival Of Colours