It was a hot summer afternoon as I stood towards the further end of the company quarter's garden. The garden had just been watered by Babu, the caretaker. In the shade of an old mango tree there were a few chrysanthemum plants with brightly coloured flowers on them. It was here that I first met Cut-tail (as I liked to call him because of the short tail that he had), a brown garden lizard. He kind of startled me as he suddenly darted towards the chrysanthemum plants from the other end of the garden.

I bent down and had a look at him. He seemed to be terrified to see me, as his heart was almost beating out of his chest and his head flushed with red. I thought of not bothering him much and moved on. The next day I found him on the boundary wall planning to feast over large green dragonflies that sat on the cemented wall. This time I stood and looked on. Suddenly, his head turned back with a quick jerk. He nodded his head up and down twice as though he wanted to tell me something. Then he turned back and got on with his hunting. He didn't seem to be quite successful though. As, each time he snapped for one of the dragonflies he fell. I later realized that it was his short tail that caused the loss of balance.

I thought I should do something to help him out. I made a slip knot with some thread and managed to catch a few dragonflies by the tail. I then gave them some slack and allowed them to only go upto the chrysanthemum plants. The same place where Cut-tail lived. The plan worked, as they were on the ground this time, Cut-tail was able to get hold of them. I was pleased that I could help him. It became a regular routine. I would rush home from school and run into the garden to feed my new friend. Cut-tail too showed his gratitude by nodding his head up and down after each meal. I would spend hours in the garden. He was no longer afraid of me and it seemed as though he waited for me to return from school each day. I too was happy to find a friend who was much better than those bullies at school.

One day as I reached the mango tree I heard a commotion in the undergrowth. I stood back and watched. Another lizard had come into that part of the garden and Cut-tail didn't seem to like it much. The red colour in his neck and head seemed to be brighter that day and he almost stood on his hind legs appearing to show off his size and anger. The second lizard was not less either. So, the tussle began. They bit, scratched and pushed each other. Even the ants and other insects seemed to stop and watch this great battle. As usual I thought I should help. My eyes fell upon a stick lying nearby. I got hold of it and tried to chase the intruder. But, as I lay the tip of the stick to the ground Cut-tail jumped in front of it and opened his mouth wide and nodded. This time I understood what he wanted to say. "It's my fight", that's what my brain registered. I pulled back at once and became a spectator just like the others. The fight went on for some time and the two remained in the same part of the garden for some time. Mummy gave me a call as it was growing dark. That night as I lay in bed I kept thinking about the fight. The next morning I rose early and ran to the mango tree. I couldn't find either of them. I didn't know what to think. For a few days I searched for Cut-tail but he was no where to be found. The dragonflies came to the wall as usual but I didn't trap them any more. After a few days I stopped going towards that end of the garden.

After a couple of months my dad got a transfer letter from the company and we moved to another town. This house had no garden. Before I left the old house I went to the mango tree one last time. But, my friend was not there.

Five years passed by and I returned to the same old town. A family friend had happened to get the same house and we were invited for lunch. I couldn't help stopping myself from going into the garden. Except for the chrysanthemums, every thing was just the same. I had read somewhere that the average lifespan of a garden lizard was 3 years, so I had very little hope of seeing Cut-tail, although I tried my best to find him. Mummy called out and I reluctantly retraced my steps back to the quarter. I had hardly taken a few steps when I noticed something move on the boundary wall. To my joy it was Cut-tail, high upon the wall raising his head in the air as a king. His body looked fatter and his skin was more rough than before. The redness in his neck and head was the same except this time it revealed the scars of an old battle. He nodded his head twice and gave me a stare. Then turned around and ran up the mango tree. I wondered what might have made him disappear after that fight but I liked to think that Cut-tail wanted to prove to the other lizards around that he was no doubt the uncrowned king of his kingdom that was shaded by the old mango tree. 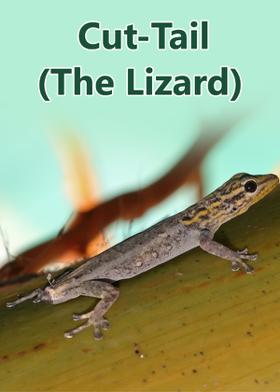