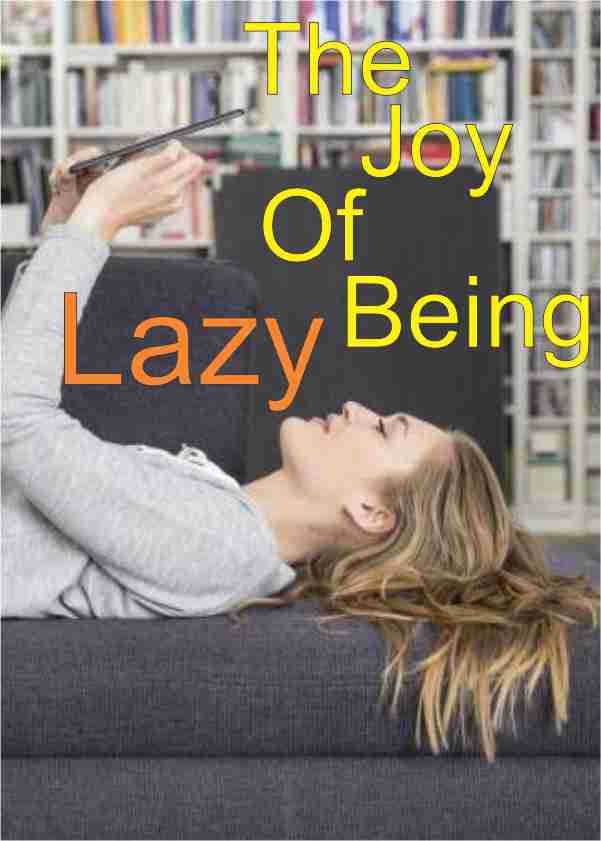 The Joy Of Being Lazy

The Joy Of Being Lazy

I feel that sometimes being lazy is required when I am doing nothing, just eating and reading a book probably. I was probing for quotes associated with laziness and could not find one productive quote. Being lazy is just against the rules designed by us and our surroundings. But at times breaking the self-designed rules infuses positive energy into our souls. I found a beautiful line on being lazy - “I am not lazy. I am in an energy saving mode.” Being lazy is not inculcated in the behaviour but if tried once in a blue moon, would engulf you with three Rs- Relax, Refresh and Recharge to get set and go once again.

Hard work is definitely the key to success but for working hard you need time for your self. Oprah has very beautifully stated that “Alone time is when I distance myself from the voices of the world so I can hear my own.” Sometimes being left alone with self, gives the wonderful joy of being lazy.

Matilda, a very hardworking wife, mother and an entrepreneur. She has a small café, where she offers snacks and beverages with a facility of a small library. Matilda once had a keen love for reading and had an amazing collection of books, which she utilised in her cafeteria. She was the mother of three, and her job started from morning 5 am and went until night, til she slept. Her family included 5-year-old Joe, 8-year-old Jerry, 12-year-old Samantha and her husband Kevin. Matilda used to take care of every minute requirement of her family. She believed that if she wouldn’t be around everything would be messed up.

She gets up at 5, makes arrangements for their lunch boxes and breakfast. Then she will be after them, screaming to get up, have bath, breakfast and everything. For everything, she had to raise her voice to the last level. Samantha, sometimes asks her to calm down and keeps telling her that they will manage, and there is no need to be so hyper every day. She will feel upset but then again she will be after them, shouting and yelling to make them do their work. This was their daily routine, to hear mumma’s voice for every little thing.

Matilda was very hard working. Soon after her family is out in their jobs, she will move to her café sharp at 9:00 am, to make it ready for the busy day. She enjoys making recipes for her customers but again had to be on her feet after her staff. She wanted everything in place and arranged. Her experience says that if she doesn’t scream, nothing would be perfect. Kevin used to ask her to calm down a little, as now everybody knows their job. But, Matilda wouldn’t listen, she will be screaming after everything.

One Saturday morning, Matilda tried to speak but realised a severe pain in her throat. She woke Kevin and tried to make him understand that she has severe pain in her throat and couldn’t speak. He immediately took an appointment from his family doctor and rushed to the hospital. The doctor examined her and told that she has a developed a severe infection in her throat and that has to be operated. But, she could not speak a single word for next three months. She should not even try to speak anything, otherwise, the problem could be severe. Matilda got a shock, she thought how everything would be managed. She had to be after everything, if she wouldn’t speak, everything would be a mess. Kevin understood her expressions and tried to relax. He said, don’t worry, everything will be ok. We will manage everything.

They came home, and children were waiting in the living room for their parents. Samantha asked, “what happened mom, is anything serious. Are you all right.” Matilda just nodded. Kevin said, “Samy dear, let your mom rest. She is not well.” And he took her to the bedroom and made her asleep. He came out and told the children about their mother’s throat infection. He said, “so champs, we have to take care of mom and house and café and ourselves. No troubling to mom. Promise”. All three of them replied, promise dad. Matilda was watching this, standing near the door of her room. She was happy to see them concerned about her but was worried how everything will be managed in three months.

After few hours, they all went to café. Kevin and Samantha took the charge of everything. They gave instructions to the staff, prepared the recipes of Matilda. She was watching them and helping whenever required. Matilda got a chance to view her family and staff working so efficiently without her continuous instructions. She got the time to relax and rethink her situation. She overburdened herself, there were people around her to help her but instead, she took the burden of taking care of them too. She was even more surprised to see little Joe and Jerry taking care of their mother and of themselves too. Now, the mornings were not silent but joyous. Earlier it was only Matilda screaming and everyone running around but now she was silently watching and everyone was screaming and doing their jobs. She got time to be lazy, to be in herself. Her value was realised by the family and her screams were understood by all. She understood that it was not required to stress her soul to an extent which disturbed the environment. People were managing themselves and they don't need to be pushed for everything.

Sometimes getting time for being lazy in any sort will refresh and re-energize our souls to rework. These three months were very relaxing for Matilda and also gave her time to analyze herself and her family in a better way. After three months she was all well but no screams. Now, they working as partners and not as mom leading and monitoring everything, though she had it was far better than before.

A beautiful line stated by Robert Tew, “sometimes you gotta take a break from all the noise to appreciate the beauty of silence”.