The Best Christmas Holiday Ever From The Diary Of Garima Chhajed

The Best Christmas Holiday Ever From The Diary Of Garima Chhajed

Reddish yellow sunset remarked a fine evening. Just a short rest, I thought and crashed on my bed. From the vast porch, came the sound of chirping birds and barking dogs. After an hour or two, the shining moon rose. My tired eyes gently closed, after staring at the sky for a minute. For once, there was peace and happiness everywhere.

Sun shine the next day remarked the start of our Christmas holiday. It was very exciting though it seemed so far away. During breakfast, mum surprisingly announced that she and dad had planned a picnic for us today! I and my siblings, George and Anne were very addicted to adventures, so we were buzzing like bees trapped in a jar! We quickly got our backpacks from our rooms and found ourselves at the head start.

It was a long expedition to the Castaway hill. When we finally reached there, it was already snack time. We ate a little, and then set off to explore the hill. It was full of subways originating from the fringe of the hill, which was covered with thick laurels making it difficult for any smuggler to enter the peninsular hill. Further down was the sea giving a wonderful look to the hill. Suddenly a thick grove of forests appeared in front of us guarded by a thin layer of smog around it.

After a minute of unexpected silence, we decided to enter the grove although the directions were unknown to us. Fear crept over us as we proceeded further. Mum suddenly stepped on a small piece of paper. George quickly picked it up and examined it carefully for a minute but dad started growing impatient. Just then, George gave a low squeal! He carefully explained that it was a small part of the map of this grove. We decided to haul a tail after a full rest of fifteen to twenty minutes.

Just then, Anne got a brainwave! From her tool kit, she removed a piece of white chalk. She explained, that we could mark the trees through which we have passed, so that we won’t repeat the way we had already taken. At the end of a long passage, we reached a well. Using a tight rope ladder from my tool kit, all of us climbed down starting with Gorge and ending with dad. We figured out that the well led us to the underground dungeons. Anne had put a chalk mark on the edge of the well at the top and outside the crack too.

Gorge and dad let the way into the deep dark dungeons with three shining torches ahead. Anne helped mum carry the heavy picnic bags. I kept putting chalk mark on the poles beside each dungeon as we walked on. We suddenly pass a big dungeon with a huge door. Dad examined its lock for about a minute. After he and Gorge chipped its lock, I pushed it open. We gasped together at the huge map which was put up over there. Anne took a few pictures of it with my old camera.

We quietly closed the door and returned to the well by rubbing the chalk marks that we made before. The rope ladder was still there. We climbed up slowly. When we finally stepped on the ground, it was lunch time. All of us ate the delicious sandwiches to our fill, wishing there were more. Before taking a short nap, we discussed how to exit the grove. Fresh and excited, we spread out on the soft green grass to locate the places on the map.

While discussing, mum spotted a strange word; INGOTS on the map. I asked if it meant some kind of treasure. Later on, we decided to follow the signs on the map which lead us to these INGOTS. After passing through many trees and bushes, webs and sandy areas, we reached a strange kind of door. It was made up of many small stones and bricks. On top of the door, ‘HONESTY’ was carved. Anne wondered what it meant. We decided to part from each other now.

Dad and Anne stayed outside with the picnic bags while George, me and mum went into the cave with an empty bag. We three entered the door cautiously, aware of all possibilities that might come in front of us. What a shock we got when we entered the huge cave! Its great walls were made of gold, and it contained the paintings of ancient times! We tried to take out the paintings carefully. One or two came out, but the rest remained stuck to the wall like hot glue. When we moved further, we found shining pearls taken out from the sea beds.

Mum took a few and we left the rest behind. George and I collected a few gold and silver coins. We also took a huge gold lamp and an embroidered bedsheet in our bag. Mum decided that we must return to the entrance door as it was getting late. We figured out that once entered, we could not exit. This was a very big problem! Mum quickly texted dad regarding this. Dad and Anne had a good plan ready for us. They decided to put it to action.

It was risky, but they did not have anything else to do for helping us. Dad replied to mum saying that we were supposed to stay very close to the entrance door. As soon as dad would push the door open, we had to race out to exit the cave. George held the bag tight and stood the closest to the door with me and mum just beside him. Dad quickly opened the door, and George, mum and I raced out as fast as we could. When we finally met together, mum showed dad and Anne everything we brought.

After the day’s hard work, everyone started feeling very hungry. Using a lamp, we ate a light dinner. Finally, we discussed the easiest way to exit the grove. The red sunset filled the sky with color. We then moved back to the chalk marks made by us before, on each tree we passed. With strength and courage all of us passed through the grove, remembering each moment of our successful journey. As we neared to the car, everyone felt very tired but happy. The day finally came to an end.

My tired eyes gently closed after staring at the sky for a minute, soaking the vast beauty of nature around me. There was a big opportunity to intake the happiness that surrounded both you and me. But this happiness would not stay for a long time, as tomorrow I had to go to school too! Good night! 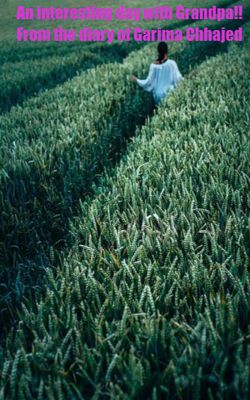