A Tribute to Madan Sir

A Tribute to Madan Sir

“May I come in, Sir?” Gouranga was seeking permission to go out of the class. He had stood up folding his hands, a gesture to beg permission.

“Repeat again.” Madan Sir asked without looking at him. Madan Sir, Shri Madan Mohan Behera, the Headmaster of Raintira Middle English School. Gouranga repeated, “May I come in Sir” repeating the same mistake. Instead, he should have told, “May I go out, Sir?”

Sir was busy checking the notes. He had the same response, “Repeat again.”

Gouranga appeared puzzled. The whole class was witnessing the fun. I was sitting next to him. I looked at Sir once and tried to help Gouranga in rectifying his mistake. “Tell- go out-“I whispered at him. He could not make out. He again said, “May I come in, Sir?”

Sir raised his head from the notes and looked at Gouranga with a dilemma which might mean like this: what happened to this boy?

It was 1989. That was the time when we were in the sixth standard at Raintira Middle English School, a school almost a kilometer away from my village. It is an Odia medium school with English as a compulsory subject. We were still beginners of English at that time.

Gouranga appeared helpless. He did not utter a single word to respond at Sir’s angry look. The whole class was silent.

Suddenly there was a blasting sound with a rotten smell. We all looked at each other. I then saw the stool falling on the floor as well as on the bench. Gouranga had lost control over his call of nature. There was a choral laugh across the class looking at the poor Gouranga. He was almost crying, his forehead sweating profusely.

Sir was still unaware what really happened. I had to tell him about the ordeal of Gouranga in a class of twenty odd students including five odd girls. He too could not control his laugh. Gouranga had his head down feeling embarrassed.

Sir ordered all to leave the classroom. He told Gouranga to go for cleaning his dirty clothes. The school did not have any toilet at that time. There was a small pond in front of the school. Gouranga went there to clean himself.

Who’ll clean the classroom? The school did not have any peon/sweeper also. The classrooms were being swept by us only. This was part of our extracurricular activities at that time.

None of us came forward to clean the classroom which still had the stool left by Gouranga on the floor and bench as well. We were standing at a safer distance fearing the order from Madan Sir to clean the room. To our surprise, Sir did not call anybody. He took a spade and dug out the marks of stool from the earthen floor. Then he brought few buckets of water and cleaned the floor as well as the bench with an eternal smile on his lips. His cleaning activities continued for almost half an hour. All the students were stunned at his relentless efforts to clean the stool left by his student.

After that, I have been taught by many teachers at other schools and colleges. But that incident at Raintira M.E. School has often come to my mind so as Madan Sir. Through this article, I offer my tributes to him. 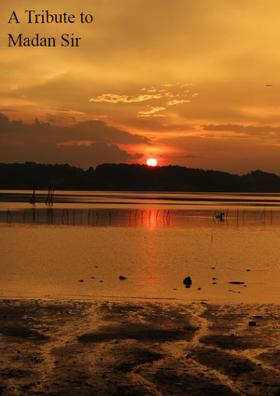