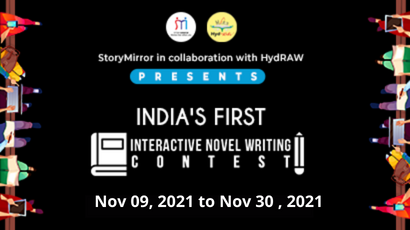 Kill or Die for Love by Vikram Patwari

The Endgame by Ketaki Bakshi

No winners for this prompt.

Haliva – A Fitting Finale and Farewell by Vikram Patwari

Darana is the half-brother of Charu, the son of Anthony Delsworth and his first wife. Continuing his late father’s quest (Anthony Delsworth dies in jail), Darana wants the formula of the mind control drug to become rich and powerful. Darana, Abhay and Ruth hatch a plan to kill Yuvaan and retrieve the sword to open the vault and take the possession of Sheryl’s lifelong research.

Martha, Ruth’s mother, has sudden influence on Ruth’s actions in the end which becomes the game changer for Charu just when she thought she lost the final battle.

Charu, Yuvaan, Abhay, Ruth, Darana all are in the submarine den underneath the link for the final face off. How Charu wins over her enemies and saves Uncle Vincent who was kidnapped and kept captive in the den is the finale.

Describe the final battle between Darana and Charu covering the below questions.

Charu had settled in her laboratory, and glanced at Vitron, an instrument used to conduct virological study. Adjoining it lay the petri dish containing Anibus/Yuvaan’s DNA, which Charu had extracted from Yuvaan’s finger nail.

She inserted a test tube inside Vitron containing Anibus’ DNA and set the machine on. A buzzing sound indicated that the antidote had failed. “Missing chains of amino acid protein”, prompted the machine.

“I need to travel back as Queen Berenice,” thought Charu, “maybe Nefret has some answers.”

She immediately put the sword in the wormhole and travelled back as Queen Berenice.

Meanwhile, Vincent’s assistants were carefully observing Charu’s activities. The moment they came to know that Charu teleported back in time, they informed Vincent.

“Finally, I was waiting for this moment. We have to go back from where it all started,” Vincent sighed. “Nothing can come between me and my throne. I am the rightful heir to the throne, and not Berenice,” Vincent connected the magnetic hose and got sucked in the wormhole.

Nefret was all set to find her love. She had got out of her isolation and was ready with the army. Queen Berenice gallantly rode her handsome horse towards Nefret and Nefret was thrilled when she saw Queen Berenice and welcomed her with a warm embrace.

Queen Berenice/ Charu, Nefret, and Vincent/ Amon are all in ancient Egypt ready for the final face off.

Berenice has little time left as Amon is closing in fast in his trail.

How will Berenice figure out the missing link in the concoction as well as defeat Amon?

Hint: She will receive help from an unexpected person.

Abhay and Charu were coming closer physically. At the moment they are about to kiss each other, Goddess Athena warns Charu. She reminds the mistake Sheryl committed and warns that she will lose her powers if she surrenders to him now. Charu, aware of her truth that, being a Zygote, expresses her will and desire to stay back on Earth and live a human life. A very insightful argument ensues on planting emotions to destroy the eclipse happens between Charu and Goddess Athena. As the eclipse falls on the next day, Athena informs that Charu will be given the sword; she has to travel back to New York in a flight where the flight will be transported to Planet Antrina. With a distressed mind, Charu spends the rest of the day. The following day, she wishes her father Oomen a ‘Good Morning’ that is goodbye forever and reaches the airport.

Yuvaan tells Charu's reality to Abhay. Though she doesn't belong to the human race, Abhay still retains his feelings towards her. Abhay tries calling Charu but she doesn't reply to his calls. He traces her number and comes to know that she is at the airport. Abhay then calls Yuvaan and both reach the airport.

As Charu starts walking towards the boarding pass counter, she sees Abhay and Yuvaan. As soon as she sees them, her eyes get welled up. She expresses her desire to stay back on Earth.

Hearing this, Abhay quickly plans that Charu should miss her flight. Though the plan seems okay, Charu is clueless. The human in her evokes rapidly as she thinks about Goddess Athena and her discussion with her.

Charu then decided to communicate with the Goddess and wants to ask two wishes : one, being able to send both species to the planet and two, being ability to travel to and forth to Earth. Charu also tells Abhay and Yuvaan about the flight to be vanished while on the way. Keeping in mind the collateral damage that might happen, Charu has to decide.

What might Zygotes or Mermitans think when they hear Charu's wishes?

Is there any way that Charu can retain on Earth while sending the species with the sword back to the planet?