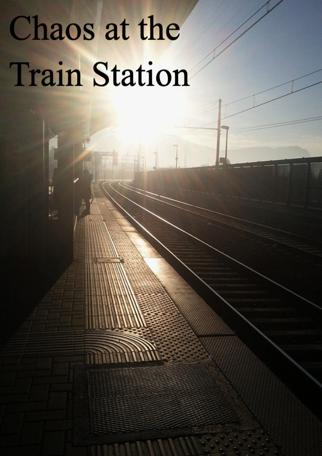 In the background, I could hear an awful commotion: men’s voices and women screaming. The bustling crowd of Mumbai’s grand Chatrapati Sivaji Terminus was panicking. Thousands of locals disembarked from their train carriages and stampeded into the exit. In the middle of the crowd, a conspicuous man, wearing all black, pulled out two automatic rifles.

“Nobody moves!!” he shouted. The entire station froze. I ducked under the ticket counter from where I could manage to see everything that was happening but could not myself be seen. “I have a bomb” the man shouted once more. The words resounded through the terminal as a very person's heartbeat rose simultaneously.

My palms were sweating, when a large group pf similarly clothed and armed men made their way out of the crowd. The entire team of attackers pulled open their vest revealing a bulky mess of wires and bombs. The unrest grew in whispers and murmurs were exchanged. This was silenced by a shot from one of the attacker's gun. Everyone stopped. “ Give us your phones” one, who looked like their leaders, commanded. One of them began collecting the phones. A few were reluctant but were kept in order by the threat of a gunshot.

While I was in view of the terrorist, I called emergency services. The terrorists collected all the phones and then gave a smug grin, announcing that they were going to kill us all. Most of the crowd, including me, began to lose all hope.

After an excruciatingly long hour, during which many were tortured, we saw our salvation. A new train arrived at the station. The train was full of armed and armored soldiers along with the Police. A gory battle ensued, which was ultimately won by the soldiers. However, there were many civilian causalities as well.

That day, amidst the acts of hatred and terror, I saw deeds of great humanity as well: men, women, and children helping each other, regardless of their class, race or religion. I walked out that day not only with my life but something more meaningful.

In the one hour between the attack of the terrorists and the arrival of the police, I went into deep thought. All the unfinished jobs, the things I wished I could have done but didn’t, the conversations left incomplete. The thought of going with all this perplexed me. I decided to live life to the fullest from then on, seizing the moment whenever I could.