The season of December is the most awaited period in the entire year wherein the air is filled with festive celebrations, joyous giving, lights and colors and not to forget music and melody! Music and melody certainly remind us of the resonating sound of jingle bells, Christmas stories narrated in the form of soothing hymns – all of which are collectively termed as ‘Christmas Carols’.

December – 2019: It was my first Christmas in this school where I was newly appointed as a teacher. A week prior to the Christmas week, I was entrusted with the responsibility of making the students sing Christmas carols during the assembly along with another teacher who had been training the children for the same all these years. Although a little nervous, I was too excited about the same as I’ve always loved listening and singing carols since childhood.

My partner Christian teacher chose the children for the carol singing, owing to her previous knowledge of dealing with them. We decided the songs we would sing, got the lyrics printed, made the children practice and memorize the lyrics. The children responded very well and synced in a divine rhythmic melody every time we practiced. We were happy about the way it appeared to us – a bunch of young and enthusiastic carol singers all set to ring the bells for the advent of the Christmas season, ready to gleefully announce the good news of the birth of Jesus and beckon to deck the halls with boughs of holly with their hearts themselves filled with joy!

Day 1- Monday: The Children were to sing ‘Joy to the World’. We had downloaded the instrumental karaoke track to aid them with the singing. But to our dismay, the audibility of the carols was too poor owing to the single mike that the carol singers were expected to sync into the PA system. The outcome was not at all satisfactory. On introspecting, I felt probably the children would do better without music and thus we started practicing without music. Another feedback that we got was to make a few children stand very close to the mike. I did that too and was hoping for better performance the next day.

Day 2 – Tuesday: The Children were to sing ‘Deck the halls… Falalala..la..lalala This was one of my favourites and also that of the carol singers. The announcement was done and the students started singing. This time without music, they couldn’t cope with the tempo of the song. That was the only flaw I assumed and consoled myself. But as we went back to our respective classes, I could hear my own class students sarcastically reverberating ‘Falalala.la.lalala’ Disappointed, I asked one of them, ‘How was the carol sounding today?’.

The boy replied with a spark of naughtiness in his eyes, ‘Miss, it was good, but it sounded as if the joy of Christmas was only being experienced by one girl who was screaming ‘Falalala.la.lalala’ at the top of her voice’. I wasn’t sure whether to smile or cry at his comment. I chose to reflect back and assumed perhaps making a few children stand very close to the mike didn’t work that well.

Day 3 – Wednesday: Again we gave a flop show. The children were too good while practicing, but weren’t effective with the mike. But we never stopped practicing and hoping for a better tomorrow.

Day 4 – Thursday: The children were to perform in the general assembly which was also to be witnessed by our principal ma’am herself. My heart was beating faster than normal and I bet the person standing next to me could clearly hear it too. Inspite of the weather being cold, I was sweating profusely whilst my fingers went numb. I had trained one child to give the count, for the others to follow. Perhaps the child was nervous too because of the previous flop shows. The children thus stood blank for about a minute until I sheepishly went forward and beckoned them to start. They started but at different scales and pitches. My face turned pale and I wished I could just flee away from there. It was hard to imagine that the carol singers who sang so melodiously during the practice sessions could mess it up so bad during the actual show.

I just wanted to cry aloud. Back in the staffroom, class, and corridors, I felt everybody was discussing our carols. I would assume every person who genuinely smiled at me, to be perhaps sarcastically smiling. I wished I could just cover my face to avoid any eye contact.

At this point, the music teachers came to our rescue and offered to give their musical touch to the carols to be sung. We had one last day to perform. We gladly received their kind gesture of assistance to our carol singers and hoped this time there wouldn’t be any problem.

Day 5 – Friday: Once again the children were to perform in the general assembly which was to be witnessed by our principal ma’am. Owing to the musical support we had, I was confident this time and so were the children. The carols singers went up to the stage and synced in the charismatic melody hitting the right chords as aided by the music teachers. They were confident, clear and finally gave a satisfactory performance even as they sang in the chorus – ‘Christmas Joy’. I heaved a sigh of relief and couldn’t thank God enough as there rightly goes a saying – ‘All is well that ends well’.

Reflecting back on the previous days and the final day, I pondered how a single touch by the music teacher could transform the output of the performance. Even as my heart was filled with contentment, I wondered what chaos the absence of music caused and what a charm its presence brought along. I found myself thinking about how sometimes we try leading our lives all by ourselves, by our thoughts, whims and fancies, not relying on God and with our hearts void of love towards our brethren. That’s exactly when we don’t find harmony in our lives. On the other hand, when we give place for God in our hearts, who himself is the embodiment of love, we see how our life seems to be hitting the right chords and blending in charismatic harmony!

Life is too short to harbor hatred and bitterness in our hearts. Let’s give room for the good Lord in our heart, fill our lives with love and laughter and am sure the music that our lives would then bring forth would earn thunderous applause! 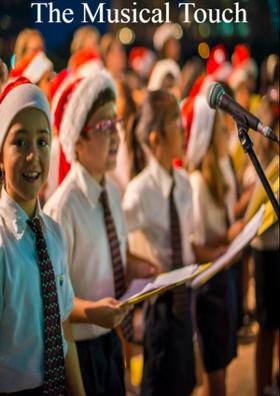