There were once three kids names Lucy, Dick, and Anne. The lived with their parents in a fine house in New Jersey, America. They had plenty of friends. Anyway, one day, they were in a car ride with their parents.

"Mum, when will we reach home?" asked Lucy, who was tired.

"After your father realizes that he's holding the map upside down, darling," replied her mother. Suddenly, something didn't feel right. They seemed to be going, sort of, well, backward. They soon realized that they weren't on a road, not even a path. It was a place surrounded densely by trees.

"Unless I'm mistaken, and I'm pretty sure I'm not, that is a Tyrannosaurus Rex, more commonly known as a T-Rex,' said Lucy horrified.

"OK, Nobody panic," said dad, while trying to remain calm himself. "There has to be, simply has to be a way to get out of here!"

"Actually, I think there is," said Dick slowly, trying to think. "I once read a book called "Crazy Myths" and one of the crazy myths was this. It said that once every hundred years one family, and I mean a whole family is chosen to go somewhere in time. You may be taken anywhere, past future... Anyway, the point is that if you want to escape, you must escape the danger of your time. You will have a series of hints that will lead you to a large golden key that you must hold high and say "Take me (or us)back to my home" and POOF, you're back."

The others had been listening in silence to Dick when dad questioned- "And what is this hint, may I ask?"

"The hint in the dinosaur world is "To find your first clue, you must follow the dinosaur footprints" Not much of a hint really," replied Dick casually yet mysteriously. Suddenly and silently Anne pointed to a large set of footprints that could not have been made by anything but a dinosaur. They all got out of the car to examine the trail of huge footprints.

"Well, what are we waiting for? Let's get going," said Lucy as they headed towards the car. Oops! Too late! The dinosaur had squashed the car! But that was no problem for them! They made their way on foot and soon reached the end of the path.

"What's this?" said Anne as she picked up an old, dirty and mud-covered sheet of paper. "It reads-"You have done well, but to find your next clue, go to the place where you get water"Let's go!"

Now where they went was their guess and luck sure did them a favor, because in no time at all, the saw the glimmer of water nearby, shining especially because of the sun. But they couldn't find any clue though and almost gave up when Lucy spotted that the water read the message- "To find the key, go north". There was an outburst as the moved their way north using mum's compass and as dad led the way.

"We'd better watch our for dinosaurs or-!" began Anne.

"You mean like that pack of hungry raptors on our tail?!" interrupted Lucy, almost yelling.

"RRRRUUUUUUNNN" And they ran, they ran as fast as their feet would take them and did not slow down even one bit, considering their alternative was being ripped to pieces and eaten alive. So I guess you can imagine the look and feeling of relief that spread over their faces when they saw... the key!

"Take us back to our home," everyone panted in unison. And, voila! They were back at home. And the second they appeared, they slumped into the bed they first saw, not even caring whose it was. And I don't blame them! What a day! Hopefully, the night will be better, and it will be! 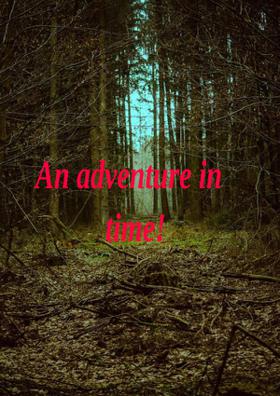