Sometimes there are things we expect and sometimes we just need to actually make them happen. And there’s a really thin difference between what you see and what’s actually there. Maybe you just need to let your subconscious mind take over your consciousness and free your imagination from the chains of reality and logic. Imagination and overthinking can both lead you to your destination and completely shatter your consciousness. It all depends upon the way you choose to build your life with all you’ve got. This one also drives through the woods into isolation of thoughts.

Noumaan was an eight-year-old boy living in the city of New Delhi. He worked at his father’s cigarette stall. Situated alongside the Jamia Millia Islamia, Okhla Vihar had many kids like Noumaan, and sadly that turns out to be the biggest irony of the place. His father never bothered to even home school the poor child. Noumaan’s mother used to tell him every day that “Someday he’ll get what he deserves. All he needed was to have faith in Allah”. Those were the wisest words he would’ve heard in his entire life; especially with that kind surrounding. The people around him and all those friends he made never helped him grow or leave. His favorite pass time was making houses of matchstick boxes. Spending time like the other poor kids on the street, Noumaan had a dreamer still alive inside him.

After spending long days the only thing that he went back to was the Street Light, situated right in front of his father’s stall on the opposite side of the road. There was something special about this one. Every time Noumaan stood under that street lamp, it flickered. Noumaan knew that the light was special and it only flickered for him. Every time he stood under it, he thought about the story of the ghost who could only be seen by those orphans; as told by one of his friends. He had different logics in his mind behind the flickering of the light. Noumaan was so obsessed with the street light that he spent hours standing in its shadow. One night while he was sitting alone under the street light, he saw a boy cycling home from his tuitions. The house was about a hundred meters inside the narrow lane that went by the side of the street light.

Trees and leaves covered any view that could reveal the house. Noumaan was curious so he decided to follow the boy, as it was for a multiple number of times that he had noticed the house. He followed the boy and stood outside the house. Peeping through the window he waited, as the boy entered the house. The dark house with no lights made him even more curious. As he was about to turn and go away he heard a loud shout “Surprise”. He saw the lights in the house with a dozen people singing happy birthday for the boy. Noumaan stood there with tears in his eyes. He was sad; the first time his conscious wasn’t allowing him to think of any relatable stories. But his subconscious mind was trying to bring up his mother’s words into consciousness. Noumaan knew that there’s something in that house that he deserved. The life he’d been living was not meant for him. He went inside the house hiding from everybody. Hearing the footsteps he hid inside the closet. As he sat inside, someone approached and locked the closet. Everybody left while he cried in the dark, asking for help and fell asleep eventually.

When he woke up the next morning, he was still afraid of the dark. He kicked the door in an attempt to set himself free. Someone finally approached and the door opened. He then realized that he was sleeping all night in his father’s cigarette stall. His father arrived and asked him about where he’d been the whole night. He told his father about everything that he experienced and convinced him to visit that place. They reached the house and found that it was abandoned for years. His father took him back home and asked him to never visit that place ever again in his life. After asking multiple times, his father finally told him that his twin brother Samar was lost into that isolated place. Noumaan was too young to understand any of those things. He nodded and agreed to all the terms and conditions.

But somewhere in his subconscious mind, he had the feeling that whatever he experienced was real and not a dream. He sat for the whole day at his father’s cigarette stall making houses of matchboxes. Eagerly waiting for the night, he slept at the stall again. He woke up at night and quickly ran towards the street light. It wasn’t flickering anymore. He waited longer, standing under it and eventually giving up. As he was about to go, he felt a chilly breeze touching his hands and he turned around. His eyes followed a boy cycling towards the same abandoned house. The street light flickered. 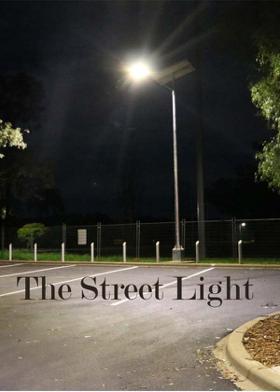