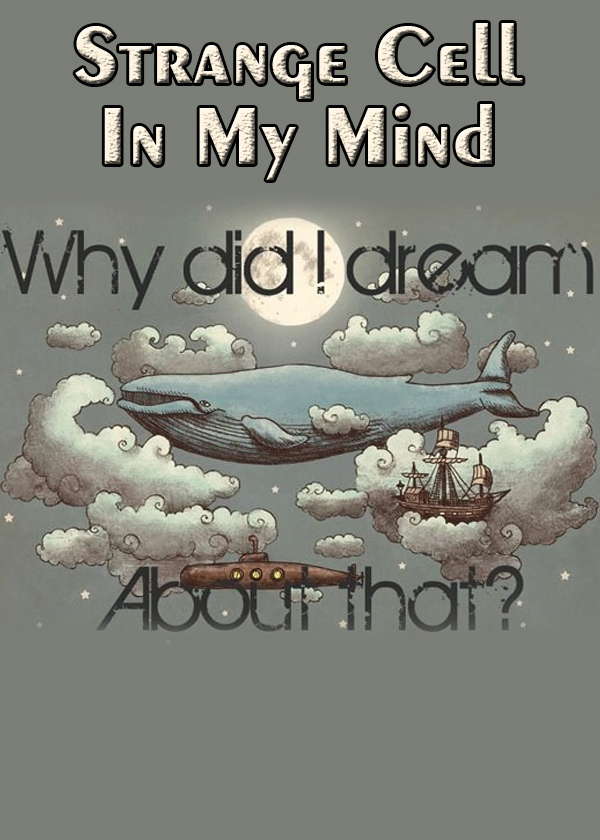 Strange Cell In My Mind

Strange Cell In My Mind

Contemplate this strange dream. You are at a black-tie festival in an extravagant hotel banquet room with masses of other people. You are all having a decent time having dinner, dancing, and chatting. When it's spell to go, you guise for your reward, but it disappeared. As you eagerly pursuit for it, a fast-moving river seems out of nowhere, dividing the room. Your prize is free on the river, however, you cannot reach it. It is stirring too quickly. When you awaken, you are bursting with a sense of terror. This what happens when we sleep and see something strange in our dreams because according to paranormal experts, when we are having a bad and weird dream, at that time, our body is feeling some negative energies around our body.

I am just 8 years old and saw something about giant animals, being rushed, bout for endurance and my dream goes like this - I envision that I am playing in my kitchen when a huge triceratops, overturned at least forty feet high, scratches the ceiling off his huge claws and tries to eat me. I escape through my house, which the triceratops demolishes through his massive strong arms and his harsh, bowed mouth. Hardly escaping, I leap on a skateboard and haste off down the way in a terror through the remains of my house tremor to the ground in a stake of smoke and a squelch of the wreckage. The triceratops follows me on his own massive skateboard. Sideways over my shoulder, I see that the triceratops is now outfitted in a flamboyant Hawaiian shirt also a stylish flyer. He is skateboarding like a champion. I contest him to a fight on skateboards, and we fight to the death. I aroused formerly the final result is acknowledged.

CONFRONTED BY THE VENERATED AL SHARPTON

This occurred to me when I was about ten years old and wanted to become famous and my entire dream revolves around famous peoples, being rushed, combat for survival and this is what I saw - My buddies and I are dangling out in school when the Venerated Al Sharpton controls in through the opposite doors. He circles up all the associates of my grade and grabs us to the seashore in massive tumbrels. There he camps us all in stadium-sized huts near Mystical, Grounds, clothes us in matching yellow slickers, and compels us to shape him a convoy of huge war-triremes in his prodigious dockyards. Me and my allies takeover a trireme and effort to discharge; he follows us on a jet-ski. We contest to get away, nonetheless, his jet-ski aids are truly life-threatening and it is eventually an exercise in ineffectiveness. He bounds from the jet-ski on top of the deck of the vessel and involves me in hand-to-hand battle by his bare handfuls. I get wide-awake when he blows me in the face.