Spoorthi fancied looking up at the sky, the twinkling stars and moon always had a special place in her imagination. She often wondered how all these magical objects decorated the night. Spoorthi's father had been to a different town for work and got late, it was almost dinner time when he got back. Spoorthi ran out as she saw him enter the quarters, grabbed his bag, and walked with him excited to see him. She had many questions in mind for him, mother was too busy in the kitchen and she always pestered father for any doubt. She kept roaming around the house following her father. Spoorthi's mother called them to have dinner. It was quite pleasant and clear outside, father suggested that they have the dinner out in the open verandah, it was his and Spoorthi's favorite spot in the house where they spent most of the evening chatting and playing. Mother spread out the dinner on the floor. She had prepared yummy puliyogare and curd rice for dinner. As they sat down Spoorthi was about to start with her questions, her mother knew she won't stop and told her to have the dinner peacefully and then ask all her questions. Spoorthi gobbled up the puliyogare and curd rice in no time something she would have eaten for hours otherwise.

After the dinner, Spoorthi laid down on her father's lap and asked him if he knew how the stars came out in the night and where they go in the morning. Why the moon looks different each day, her questions went on, she hardly waited for her father to answer them. Father simply smiling told her that she was going to find out the next day. He told her that she will get all her answers and much more but had to be a good girl and get ready to go to the city quickly in the morning. She was too curious to find out but had to wait. She went to bed making a list of all the things she wanted to know.

Spoorthi woke up at the break of the dawn. She was ready in her cute red skirt in no time and waited for her father to also get ready. Mother packed Upma into two Tiffen boxes for breakfast on the way. Spoorthi and her father took the first Bus to the city, she had her breakfast on the way and as usual, she counted the trees on the roadside as the Bus went through many turns winding along the hills that surrounded Spoorthi's town. The Bus reached the city around noontime, it was very hot here unlike back home. Father decided to hire an auto-rickshaw which was a luxury as they always walked or took the buses normally. The auto went through the business district, the black roads were well-kept, the pavements had been recently tiled due to a visit from the prime minister. The tall buildings, the cars, neatly dressed people around were all an amazement for Spoorthi. They passed through the city hall and the beautiful park and reached their destination. Once they got down, while her father was arguing with the auto driver for asking more money than the meter price, Spoorthi read out the board of the place. She struggled a bit and slowly read out as Nehru planetarium. She was thrilled as it had been a long time wish for her to visit the place, she turned around and hugged her father. As it was school holidays lots of kids were there like Spoorthi, all waiting for the ticket booth to open for the next show. They patiently waited in the line, the booth has very informative messages written on the walls. Spoorthi and her father read them along, she came to know that earth was the third planet from the sun. After the ticket counter, they entered a huge dome, there were many models displayed for various planets, rocket, etc., Spoorthi also got a chance to check her weight not only on earth but the huge display showed her weight on all planets and the moon. Spoorthi was very happy to know that she weighed only about 3.3 kg on the moon, no wonder she kept dreaming of flying on the moon surface !!!

Inside the Planetarium there was a large, dark auditorium. In the auditorium, they got dark glasses to wear. They were seated in a circular fashion with all seats facing upwards to the roof, They wore the glasses and looked up at the beautiful roof. The dome-shaped white roof looked like Space. As the show started the auditorium became dark, Spoorthi afraid clenched her father's hand, he patted her in return and told not to worry. Suddenly they saw the planets and stars like Jupiter, Mercury, Venus, Mars, Saturn, Earth, Uranus, Neptune, and Pluto. Space was very exciting, She saw how the Universe was created with the Big Bang. In the Universe, the stars were shining very brightly. The commentator in the background explained how the stars and solar system were created. She learned some new and interesting facts, that Pluto is made of ice, there were rocks made of ice floating in Saturn's rings, also saw how the Earth is made of gases. Black Holes, Galaxies, space showers, meteorites, etc. She felt as if were in real space. She saw the Milky Way and our Solar System, the planets were also looking real. she was thinking that Meteorites are coming to fall on her, Beautiful Shooting Stars were falling down at great speed. She felt like flying in the space. After an exciting 30 minutes, the show came to an end.

This was an amazing day, she could just not stop talking about the show, she felt very happy, hugged and kissed her father for getting her to the planetarium. After the show, they came outside the planetarium, several street vendors were selling eatables. They bought puffed rice, peanuts, and the pink cotton candy, sat down in the park, and lazed around for a while. It was almost evening and they decided to head back. This time they took the city bus which was a double-decker. Spoorthi ran to the top and sat in the front seat. The city looked prettier as the Bus made through the roads, she held out her hand from the window and touched the tree branches on the curbs. They reached the city center and got the bus back to her town. Once they were back home, she hurried inside and told her mother that it was the best day of the summer vacation !!! 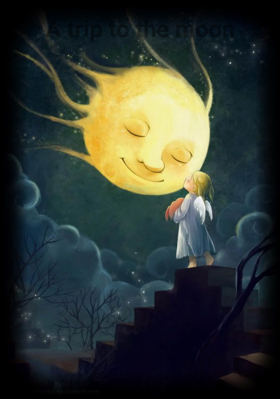