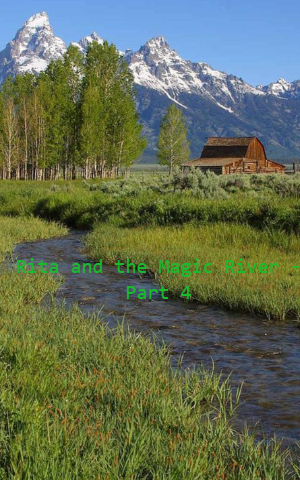 Rita and the Magic River - Part 4

Rita and the Magic River - Part 4

Soon, they reached their house. It was a nice cottage with two rooms on the ground floor, and one on the first floor. The garage was a right next to it. Beautiful trees grew, forming a curved shape, and it felt warm and comfortable to walk into it and escape the hot sun. When Rita entered the cottage, she was very surprised. Her city house was much different. The moment she stepped inside, her shoes made the stepping on wood sound. There was a fireplace since the countryside was very cold. 'All of our things have been packed and will arrive by tomorrow' her father said. 'But how will they drive the truck into the small lane?' Rita asked, and her father didn't reply since he didn't have an answer.

The first thing her mother did was go outside, enjoy the cool breeze and look at the plants. There was a large Mango Tree, and it was summer, so they were ripe. There was a bench surrounded by bushes and was decorated with artificial flowers. Rita's mother didn't approve of them. 'Why do we need artificial flowers when we have real ones?' she grumbled and sat on the bench. Then, she muttered something about people never appreciating nature.

Rita was excited to explore the house. 'Do you want your room in the first floor or ground floor?' her father asked her. 'First floor!' Rita said excitedly. She always preferred the highest floors. It was decided that she'd have one room in the first floor and her parents would have another. The room in the ground floor would be her father's workspace and Rita could use it to study too. Rita ran up the stairs and chose the bedroom with the balcony and went inside the balcony. The view was wonderful. Her teachers often showed videos of nature in class, and Rita always thought it was no big deal, but when she saw it from the balcony, she was wonderstruck. She could see plants, trees, mountains, fields and so many other things, but what interested her the most was the waterfall.

Pure water was falling from the topmost mountain till the bottom, and it was so beautiful to look at. The waterfall gave birth to a river, which, surprisingly, was even more beautiful than the water fall. There were small plants near the river which occasionally got wet, and there was a tree with many fruits, but Rita couldn't make out what tree it was, since it was quite far. 'We can visit in once in a while' her mother said entering the room, as though she had read her mind. 'Yes!' Rita said happily. 'I want to go there now!' 'We can' her mother said, glad that someone was interested in nature. So her father, her mother and Rita, excitedly left for the River, that, aside being beautiful, was magical.