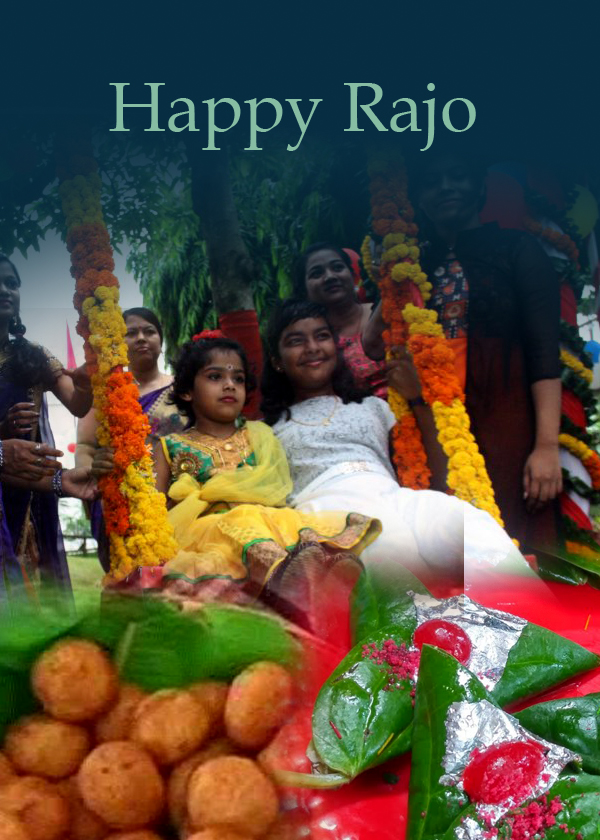 The tattered city looked much a little agile after being ruthlessly ploughed down by cyclone Fani. The markets of Bhubaneswar were bustling with the harmony of festivity. Ed had just passed by and ‘Rajo’ was around very unique Odia festival. It was a month now and things in the capital seemed somewhat normal.

Smita was a visitor to the city. Smita was from Benaras. She had a passion for photography and social service and was very quick at making friends. Smita studied Political Science at ‘Benaras Hindu University’ with Manasi Pani, her local friend and guide Bhubaneswar. Manasi was visiting her parents after the disastrous Fani cyclone; Smita had joined her on the trip.

For Manasi, Rajo meant lot of ethnic gastronomy, a good shopping spree and catching up with friends and relatives. Smita was curious about Rajo celebrations. She had never heard about such a festival at Benaras or anywhere across North India. For Smita, it was an introduction to a completely new notion of festivity.

Manasi’s Mother, Mrs Pani insisted that Smita should be gifted three new dress as she was their guest for Rajo. Smita was not much keen. Smita agreed to accept the gift but insisted that she be told more about the festival so that she could participate and enjoy along with Manasi’s family. Manasi’s mother sat down to explain Smita about Rajo, she started “ Smita, in Odisa, 'Rajo' or Mithuna Sankranti is a 5-day celebration. It marks the entry of monsoons after the scorching summer heat. The sweet smell of the Earth, drenched in the first spurt of rain, sets the stage for a successful green year. The last reap of mangoes and jackfruits are relished and bid adieu until next season”. Until now Smita knew of festivals like Baisakhi and Holi, to welcome seasons. She was amused to learn about a festival that bids goodbye to a season, with so much gratitude and fanfare.

Manasi’s mom continued her Rajo commentary. She said “women are given a three day sabbatical from their daily household chores”. Smitha had never seen her mother relaxing even during festivals and holiday. Here there was a festival that gave women, a comforting break. Mrs Pani continued further and added another unique dimension to the festivity. She said “Smita, you know, it is also believed that Mother Earth undergoes her menstrual cycle during these five days, reassuring her fertility for the coming cultivation season”. Smita was astounded. Mrs Pani carried on, “you see Smita, women and Earth both encompass life in totality. They live to create another life. So, during the Rajo celebration young girls, like you, dress up in new clothes, looking their best. They are the prospects of a healthy and happy future. They are all mothers to an upcoming generation.” Smita blushed, while she continued listening to Mrs Pani with her eyes down. Smita could now well relate to Rajo as a festival dedicated to Mother Earth and womanhood.

Mrs Pani continued with her description while filling rice dumplings with sweet coconut and jaggery stuffing, to be steamed, a local delicacy known as ‘manda pitha’. She continued with her unfolding “You see the swing on the mango tree in our backyard, during Rajo trees are adorned with swings.” She got up to put the manda pitha on the steamer while Smita peeped out of the window to have a look at the swing.Mrs Pani continued, “Beta, trees are symbol of fertility and selfless charity, during Raja young damsels sway back and forth on these swings. All you girls would soon be selfless mothers, swaying with life’s ups and downs.” Mrs Pani had again given an astonishing interpretation to the Rajo festival. Smita was excited about this facet of the celebration. She was proud of being a woman, the only creation on Earth capable to create another life.

Smita was fascinated by the Rajo festival. It meant to celebrate an absolute forbidden, that restricted women from entering Hindu shrines. She recollected the recent verdict in favour of women by the Honourable Supreme Court of India. A verdict that had kindled mobs at Kerala’s Sabarimala temple. She wished every woman could celebrate herself as a creator of life.

Smita joined the unique celebrations. Enjoyed typical Odiya delicacies –Rajo ‘Podo pitha’, a rice cake wrapped in banana leaf and baked in the earthen stoves. She knew about Dusshera and Ram Navami where non- menstruating little girls are offered puja during the nine day festivity. But here there was a festival celebrating menstruation, perhaps the biggest taboo in Hinduism.