The Clever Girl And the Lazy Girl

The Clever Girl And the Lazy Girl

A girl named Mary was very innocent she was the daughter of her father. There was also another girl called Gina she was so lazy that she wouldn't get up at all. They both had a stepmother she was so cruel to Mary that she would make her do the household things. One day, her stepmother threw her out of the house and told her to earn some and come in this house, he was very angry by the women's behavior. Mary kept on walking day and night. One day, when she was walking she comes up with the old tree. The old tree called her and asked where was she going. The girl proudly replied that she wants to earn some money. Then the tree said that can she take out the dry branches from the tree. The girl said why not sure and she carefully took the branches from the old tree and then left.

Then, she went across the well and l told her that can she clean her and make it clean. The girl agreed happily after she completed it she continued her journey. Then afterward she came across a dog that was untidy. The dog called her out and asked if she could clean him. The girl happily replied yes. So, she saw a lake she washed him carefully and cut the long-grown hair. After she was done she went back to her journey. Then she came across a house where the fairies lived. When she entered there were 8 fairies she told them if she could stay here for the night and she leave by tomorrow. One of the fairies asked her why did you come here. The girl said she was trying to find a job and earn some money. Then, the fairy said that if she wants to work she can work here Then the girl was happy. Then the fairy said that she will have to work here for 1 year. The girl said okay. Then the fairy said that there are 8 rooms in this house you will have to clean only the 7 rooms. But, you should never enter the 8th room.

The girl worked for 1 year and never entered the 8th room. After, 1 year she told the fairy that she wants to go home. Then, the fairy told her before you go follow me. The girl followed her. And the fairy was entering the 8th room. There were lots of golds, silvers, rubies, emeralds, and diamonds. The fairy told her to sleep here tonight then the golds and silvers and all the rubies will stick on your dresses and you can take them home. The girl did as she was told. The next morning, all the jewelries stick on her dresses and went back home. The old tree that she met earlier asked her to eat some apples. The girl ate some and put her in the bag. Then she met the grapevine , the grapevine tree invited her and told her to drink some vine. Then she met the dog she had cleaned ,the dog then told to follow her then she saw lots of diamonds then the dog said to her that she can take as much as she wants. Then she collected some of them and went home. When she came back home she hugged her father and the stepmother got jealous of her and told her another daughter that earn lots of money than Mary.

Then she went to her journey. And she went across the old dry tree. The old dry tree told her if she can take of the dry branches. The girl said that she doesn't want to do and even told that she doesn't want any wounds in her hands. Then she ran away from there. There she met a grapevine tree it said that can she take out the dry branches for her. The girl said no and ran out of there.Then she came across a dog who was very dirty. The dog asked her if she can help him. She said no and went away from there. Then , she came across a house where the fairies live she asked them that can she live here for the night and tomorrow she will leave.Then the fairy asked her if she can work here for 1 year.The girl replied yes. Then the fairy told her that there are 8 rooms she should clean only 7 rooms. The girl agreed. The girl worked for 2 days. And then she decided to sneak in the 8th room. When she entered the 8th room The bees, spiders, and all insects started to crawl on her. When she ran out of the house she was covered with all blood and her face looked untidy.

She asked the dog if she can help her. But' the dog chased her away. Then she came up to the grapevine there were many grapes and vines but the tree did not make her drink or eat anything. Then she saw many fresh apples she tried to pick one but the tree did not make her touch anything. When she came back home without any money. Her mother was shocked to see her daughter full of blood. The stepmother was ashamed of herself. And then the father told both of them to get out of this house and to never ever come again. And the father and her daughter lived happily ever after. 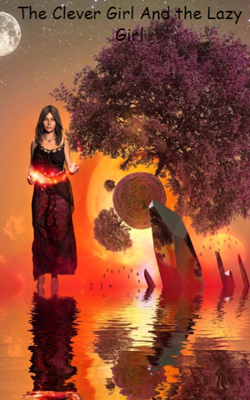