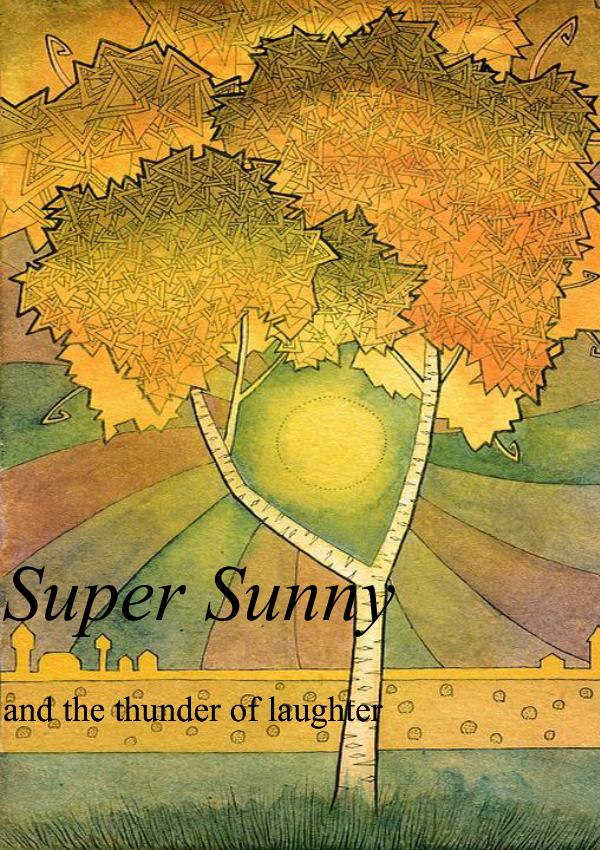 In a land not so far away called Udassi, where people worked and toiled day and night, lived a young boy called Sunny. Udassi was a land where even the last echoes of laughter had died, and it had been a long time that anybody even smiled. So much so that now people had even forgotten how to smile. All day and all night they worked tirelessly. It was not as if any disaster had struck this place but rather the monotonous slumber had eaten up the little joys. Sunny studied in a school where it was of the utmost importance to stay serious. And in fact it was here in this very school that they were taught to brood and stay serious. All day in and all night Sunny wished he was a super hero. How wonderful it would be to have some super power like the ability to fly or may be super speed. Super speed would be even better then he could complete all the homework on time as well. Sunny would often day dream into a different world and go on all sorts of adventures. But then rarely was he able to complete the adventures as a chalk would hit his head and bring back into the classroom. The Teacher would frown upon him with a grumpy face and an even grumpy tone that sounded like a cow mooing angrily.

Days would turn into nights and nights would turn into day. The funny thing was that there was nothing funny happening anywhere and people didn’t bother doing anything other than work. Even the children would always be busy working. The children that played sports were also training for medals and it was a very serious business everyone was told. So much so that people had no time for fun. In fact had you asked anybody what was fun. They would have gotten confused and perhaps exclaimed after a deep pensive thought with a brooding face “work is fun”. And we all know if work was fun then it wouldn’t be called work anymore now would it. So you can well imagine why Sunny longed for super power. His main reason was to finish all the work and help people. And that was the reason why Sunny was not having fun, because of course there had to be at least some one to play with. The little toddlers were the only beings perhaps that didn’t work. But they were too busy sleeping, having milk and crying and more sleeping and more crying and well just getting ready to grow and do more work.

Meanwhile Sunny just like everybody else worked day in and night and at night slept wishing to have some super power. Every night he had the same dream that he had everyone laugh and just as he was about to smile at his accomplishment, the dreary alarm clock would burst the dream ringing like a wailing child.

Now of course everyone could have a reason to explain as to why people of Udaasi never ever smiled, laughed and frolicked. But if you were to ask me the reason was simple. It was because nobody in Udassi had ever seen their own grumpy looking serious faces. Looking at other grumpy face can make your more grumpy but looking at your own grumpy face will make you want to stop being grumpy and smile. After all who wants to look grumpy if you ask me.

“Why they had never seen their own faces ?”, you might ask. Well, the reason for that is simple. Long ago in the city of Udaasi, people had stopped working and they would just keep looking at the mirrors all day and spend hours in front of it doing nothing but admiring themselves. Hence everyone had decided then that from now on there would be no more mirrors in the city.

Initial few years saw the most productive years in Udaas. In fact the city was earlier called Karm Bhoomi. But a few decades later people got so involved in the work that they stopped having fun and became too serious. Now it is a well known fact that anything in moderation is good and the extreme step of banning the mirrors took the people to the other extreme. So much so that all the other people from the neighboring cities started calling the city as Udaasi. Anybody who would go into the city would feel the immediate effect of the city and would get carried away by the culture of the city. So even the happiest go lucky of the fellows would become dead pan serious. But the history of this city was unknown to its inhabitants. After all it had been ages that they had began to work. And they couldn’t even imagine any other way of living. And the reason for that was simple, because people here were so involved in work, they never had time to travel of even thought of indulging in such fantasies. Every city has a consciousness and the this city spoke only of work day in and day out. But Sunny was a curious one and he often had a lot of questions. But for every question, he asked there was always the same answer.

“What is outside the city ?”

“Ask questions only related to work”, said the teacher with a voice that boring which could put a ferocious tiger to sleep.

“We work because we have to”

“We have to work thats all there is to do.”

“Well there has to be something else to do?”

“And what would that be?”

“I don’t know.. But there has to be..”,Sunny said strutting to say something but he didn’t know the words to describe it.

“There is no such thing as Unwork. In the meantime get back to your work”.

At moments like these Sunny wished he had some super power which would finish all the work for once and all. So that they could so something else. Perhaps the word that Sunny was looking for was “Fun”. How easy it is for us describe things that are fun, because we know the word. But imagine the state of a boy of ten who has no idea there is a word called fun. Maybe Sunny had an idea in the head of a state of no work but then he didn’t even know the word laugh.

But does it matter if you know the word or does it matter that you know what the word describes. Because life has a strange way of showing things that we wish to. e.g. Sunny had no idea he actually had a super power waiting to be unleashed.

It was the school trip to the forest nearby and it was no fun trip. On the contrary it was a very serious trip. All the children of class five got out of the bus and that had to walk in a single file all the time. The reason they had come to the forest was to study the plants and of course do more work. They would get to know all the professions and work that were related to the forest. But little did Sunny know that today was also the day when Sunny would face his super powers for the first time.

While they were all busy collecting firewood for the camp, sunny had wandered off listening to the sound of river roaring. As he went deeper into woods the sound was becoming louder and behold he came across the biggest water fall anyone had very seen and as he saw the water fall down he saw his reflection in the water. Sunny had no idea whose face it was. And so you can well imagine how surprised he must have been when he saw a face peering out of the water and staring at him grumpily. It was his own face but Sunny was the first person to see his reflection in the whole city since many years now. So he had no idea that the reflection looks exactly like you and the reflection copies every little move you make.

It took me a while to understand that it was his own face he was looking at and when he realized how he looked with a grumpy face; Sunny burst into the loudest laughter anyone must have ever heard. A laugh that would change the entire city of Udassi.