It is a cool winter morning. I was woken up from sleep by Samyuktha. She said that my son has come here. Then the happiness I felt was unbounded. I got out of bed and headed over to freshen up. Soon after that, I went out of my room to meet my son. But my happiness was short-lived. He was not my Aarav. Samyuktha must have confused me with someone else. My happiness was shattered but my hope wasn't. Then I went into my room and sat on the chair thinking about Aarav. Suddenly, some voice interrupted my thoughts. It was Samyuktha's voice. She apologized to me for the confusion and asked me to have my breakfast. After completion of my breakfast, I went to the cupboard to take the photo album. I was turning the pages in the album and suddenly found a piece of paper in between. It was an art by Aarav. He drew my picture. He was around six years when he drew that. He presented it to me and said "I love you Maa" and hugged me tightly. I felt like travelling back to that time and hug him tightly. After that, I found a picture of Aarav which was taken on Janmashtami. I got him dressed like Lord Krishna. It was his first Janmashtami picture. I love that pic. It reminds me of how Aarav used to run with his small feet. I feel that it was the best time of my life. I continued to look at other pictures. Each picture reminds me of how Aarav's childhood passed. I used to enjoy everything about Aarav. I had put a lot of effort into bringing him as a responsible person. He was an easy-going child he never troubled me. As I'm a single parent, I need to take care of each and everything about Aarav. Sometimes I was afraid that he might turn bad but he was always a good child, a good student. Then I found another picture of Aarav when he graduated from college. He was a young boy with a lot of goals in his mind. He always used to tell me how he wanted to contribute to the country's development. After completion of his education, he had joined public services. After two years Aarav got married to Radhika. She was very good to me. Sometime later I moved here to let my children have their life on their own terms. Those were some of the good times in my life but everything has changed now. I feel like everything happened in a flash.

The next day Samyuktha came to me and handed over the phone to me and told me it was from your son. I laughed and asked her "Is it for me or somebody else?" She laughed at me and said, "This time it is for you Maa." She left the room on hearing someone calling out her name. I took the phone and asked

Me- How are you Aarav?

Me- I'm good. How are Radhika and Yash?

Aarav- They are good Maa. Yash always asks me that when would you come. I told him that I'll ask you and tell him. When will you come home Maa?

On listening to that I felt moved.

Me- I'll come sometime later. In between you please come and meet me for once.

Aarav - Maa, I know this would be your answer. I know Radhika is not fine with you staying with us and that is the reason you went there. You might have done what she wished for but why did you punish me.

Me- I wanted to stay here. There is no fault of Radhika.

Aarav- I know you did this for my happiness.

Me- Aarav, why do you take the guilt? It was my decision and I'm happy with my decision. So now tell me when will you come here?

Aarav- Maa, probably I would come there next week on my birthday. I wish to celebrate this birthday with you.

Me- Wow!! On listening to this I can't wait for your birthday. Please come early on that day so that we can spend more time.

I'm happy that they will come to meet me. I'm excited to meet Yash after a long time. I know it was a kind of energy drink for me. I was eagerly waiting to meet them. I was reminiscing all the memories and was counting down the days for their arrival.

Finally the day i had been waiting for has arrived. I woke up early in the morning to get freshen up and prepare Aarav's favourite food. I prepared chole bhature, double ka meeta, aloo paratha, palak paneer for Aarav and I also made Yash's favorite pasta and butter chicken and biryani. I finished all my work in the kitchen and was waiting for them. It was 12:30 PM but they didn't arrive. Usually, Aarav would come on time but today he was late. Then I thought that maybe he might have stuck in traffic and explained myself. It was around 1:30 PM but there is no sign of them. I felt tensed and called him. He didn't lift the phone. Then I called his office but no one answered it. Finally, I made a call to Radhika. Even she didn't lift the call. I felt like something was wrong but can't understand what it was. After some time Samyuktha brought the phone and said it was from Radhika. I took up the call and asked her where are Yash and Aarav, why didn't they come yet.

Me- What happened Radhika? Why are you crying?

Radhika- Maa, Yash went missing. He's not at home. We enquired many of his friends but we couldn't find him out

Me- Where is Aarav? Did you people complain at a police station?

(Radhika handed the phone to Aarav)

Aarav- No Maa, not yet. I'll go and report them. You please come home maa, Radhika is alone and I'm not able to calm her down.

Me - Okay you go and file a complaint. I'll come.

I felt like it must be a bad dream but it isn't. Soon I called Samyuktha and told her everything and asked her to get a car to go to Aarav's house. I'm completely puzzled with what had happened. I can't understand the reason behind this. All these questions were whirling like a cyclone in my mind. Then all my thoughts were interrupted by someone's voice from distance. It is Yash's voice. He was calling "Dadi... Dadi..." in a sobbing voice. Soon I rushed to him and hugged him tightly. My happiness was boundless. I immediately called Aarav. He didn't lift the call so I called Radhika. She lifted the call and was still crying. I told her that Yash came here. She couldn't express her happiness in words. I told her not to worry and asked them to come fast. She told me they will be here in an hour.

Then I took Yash to my room. He was still crying. He was crying cutely same as Aarav used to do when he was a kid. I felt happy that he was safe. I tried to calm him down. Finally, he stopped crying and hugged me tightly and said " Dadi I love you and I miss you." I got teary-eyed on listening to his words. Somehow I controlled my emotions and asked him to freshen up. I know he would be hungry after all this so I brought him all the varieties I made for them and served him. He thanked for preparing his favorite dishes. He asked me to join but I told him I'll eat along with Aarav. He smiled and said "Okay Dadi.." After that we went and sat on the bench outside my room and he was telling me about all his friends and about his school. Meanwhile Radhika and Aarav came here. They immediately hugged him and asked why did he do this. Then he told " I had requested you people to take me to Dadi but mom never agreed. So I requested you dad. Finally, you agreed. When you told her this morning that we will be coming here, she reacted differently. I was afraid that she might not allow me to come here. So I ran away from home and came here."

On hearing this tears began seeping down my cheeks. I couldn't calm down myself. Radhika then came to me and said-

Radhika- I'm sorry Maa. Being an independent women I felt that I should live my life in my own terms. I never tried to understand you. I know that you can't stay away from Aarav but you did it for my happiness. It was my fault that I didn't stop you from leaving home. I came to understand your feelings only when Yash went missing.

Me- It was not your fault Radhika.

Me- Radhika don't blame yourself for what had happened. It's not your fault nor mine. I can understand what you are going through. I'm not among those people who gives wings to their children and not let them fly but I'm among those who gives wings and allows to fly. You people need not worry about me. I'm good here and everyone here is good to me. Please take care of yourselves. I know you people were upset but please cheer yourselves let's celebrate Aarav's birthday.

Aarav- I respect your decision Maa and Bless me Maa.

Me- Happy birthday Aarav and God bless you.

We had our lunch and then we spent some good time with other members in the rest home. They stayed here up to six in the evening. After they left I went back to my room and sat in a chair. Today, I'm happy that Aarav and Yash would be happy as everything was sorted out. I was astonished by the fact that what a wife nor daughter-in-law couldn't understand was now understood because of the super power-"motherhood." 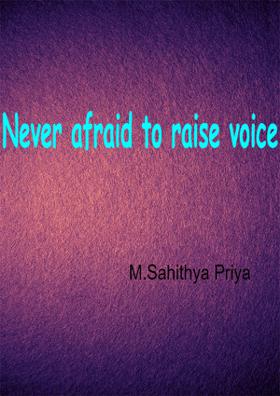