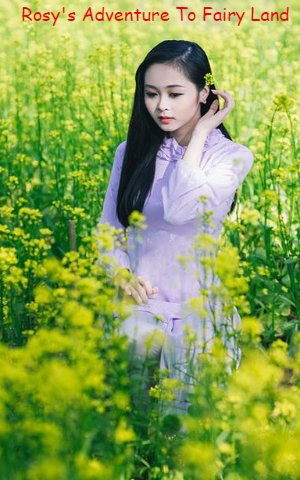 Once upon a time, there lived a small, cute girl named ROSY. She lived in a village with her parents and her small brother.

One fine afternoon, she went into the woods to play with her friends. They were playing cricket. It was her turn to do batting, her friend threw the ball and she hit it so hard that the ball went far in the bushes. She went to fetch it when a monkey took the ball and swung away.

She tried to take it from the monkey but she couldn't. Luckily the monkey dropped the ball and Rosy picked it up quickly. She turned to go back but alas! she was lost. She went forward in the hope to find her home, suddenly she heard someone singing! She went in the direction of it and to her surprise she found a beautiful fairy in front of her.

The fairy was very kind and gentle. Rosy went forward and asked the fairy if she knew the way to her home? But the fairy did not know it. Rosy was about to turn back but to her surprise, the fairy called her. And said, "You are allowed to come to my home, rest, and then continue the journey to your home". Rosy happily went to the fairy's house.

It was very beautiful and it was shaped like an ice-cream. Besides that, there were many funny shaped houses like strawberry, watermelon, chocolate, apple, banana, etc. All tasty food shaped houses were looking very nice. She liked their shapes, styles and they looked very funny to hear! She went inside the fairy's house; it was very warm from the inside too!

She ate some porridge that the fairy gave it to her, it was strawberry flavored! Her favorite and was tasty too!

The fairy now took her to the park. In the park, there were many flowers. They looked very funny too! Their shape was like some candies and they were edible! The fairy looked at the stunning eyes of Rosy and said: "Oh darling, you may take one". Rosy ate and felt a delicious taste of chocolate in her mouth. Then she played on the slides that just looked like ice, the swings that looked like frozen milk. She was astonished by all the amazing things she saw.

Now the fairy took her to the huge waterfall. Oh!! The waterfall was not having water but melted chocolate. And this chocolate was flowing through the rocks made up of chocolate bars! They enjoyed it so much together. The fairy looked at Rosy's clothes and asked if she wanted to change them as they were all dirty. Just then Rosy realized she has mud all over her clothes as she ran through the jungle behind the monkey. Rosy went with the fairy, she was thrilled to see so many clothes decorated with many gems, glitter, and sparkles. She chose one of her sizes and showed it to the fairy. Wearing the dress, she just looked like a beautiful fairy. She exclaimed "Wow!! That's so beautiful!"

It was getting darker so the fairy took her to her house. The fairy showed her way to the bed. It was a very cozy and warm place to sleep. Rosy slept there with the fairy beside her and slept a sound sleep.

The birds started chirping, and the Sun rose up. It was morning, Rosy woke up and saw the fairy was getting ready for something. Rosy asked, "Dear Fairy, what are you getting ready for?" The fairy said, "Oh! you woke up dear, It’s a grand party in the fairyland". "All the fairies would be joining that and I am invited too".

The fairy asked Rosy if she would like to join as well. Rosy was all excited and got ready along with the fairy. Rosy hopped in the car which was decorated with stars.

She went to the party she was delighted to see the grand decorations and ate tasty food. She also played games with the other fairies.

When the party had finished. They went back to Fairy's house and got freshen up with other clothes. Suddenly a messenger fairy appeared and told the good news about finding Rosy's home. Rosy was very happy. The fairy gave a very pretty locket to Rosy as a farewell gift. All other fairies came and waved at Rosy and said "Good Bye!!"

Then Rosy went home happily and told her family about the things that had happened and all of them lived happily ever after!!!!!! 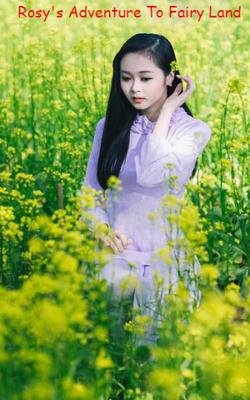