Of Fruits And Floods

Of Fruits And Floods

Summer tasted like fruits. Always. Mangoes and Jackfruits to be precise. The crop had its variations, the taste was implanted and imprinted to be a constant. There were years when not one tree bore any fruit at all. Those years tasted like mangoes and jackfruits too. The burst of sweetness, the sticky aftertaste, and stickier hands was summer. We loved the summer. As fiercely as the Char people dreaded them. For them, it tasted like flooded waters of the Pagladiya and the Brahmaputra. It was unrelated to the willingness of the monsoon winds to consummate with the river. Summer meant floods, summer meant fruits – in different corners of the same world. One oblivious to the other.

We loved the fruit-bearing mother trees. They were the cornerstones of our imagined garden of earthly delights. Flanking the periphery of the ancient house we called home, our father, the trees had our heart, though our tired bodies were sheltered by those roofs of rusting corrugated iron and creaking beds adorned by museum-worthy layers of grime and dust. The trees and the house needed each other, they couldn’t stand each other. It was a loveless marriage and we were the bastards born out of unspoken unions. The wind’s midwifery extended far north of our troubled births and obsequious existence. She carried gossip and judgments from one bastion to another, making a society out of our solitary enclosure – wicked, unforgiving, and deceptively pretentious. The trees murmured and passed judgments on the house and the wind dutifully carried it on most nights to the house – the judgments dripping slowly and steadily through the holes on the roof highlighting newer avenues for the house to rot and rust in despair.

We silently watched a pained existence passing into oblivion. We didn’t feel sorry. The trees had our hearts always. The wind smelt of ripe mangoes and jackfruits and we ignored the messages it carried as did we ignore the groans and grimaces of the house. We were indifferent. It was not our fault. We had been rendered insensitive. We emoted sans depth, we empathized sans soul. We had rusted gradually, withered away in fine microscopic particles by and by with the house. The house was us, we were the house and the hatred was mutual. We wanted to fight back, to scale the walls and escape, to cry our lungs out, to live. We did not. We could not. All we cared about were mangoes and jackfruits. And the trees in the garden which lent us that taste. We didn’t know of other trees, other houses, and other fruits. The house created us and the trees nurtured us and the fruits helped us survive.

The wind tried to teach us dissent but it failed. We did not care about the midwife. And the taste of lychees that she carried laboriously for us to be intrigued and for us to explore. And particularly, the encrypted gusts masquerading as a partner to the rain in those shimmering dances of stormy death that informed us of the key to open gates. The key to a world outside. A world where lychees existed. A world where summers meant more than floods and fruits. The trees didn’t like those nights, they swayed violently in disagreement. The house didn’t like those nights and tried to drown traitorous undertones with a cacophonous symphony featuring banging doors and clanging utensils and rattling windows. We didn’t like those nights. We clung onto the dust and grime and rust and the dampness – dreaming. Dreaming of summers and floods and trees and mangoes and jackfruits and an ancient house with rusting corrugated iron roofs and dusty beds.

We were rendered indifferent. We never dreamt of lychees and winters and vast borderless grasslands. We could have but we did not want to. We were, after all, the illegitimate children of a loveless marriage, fed and watered, marching proudly towards death and decay. And we loved the summer. Lord knows we did! 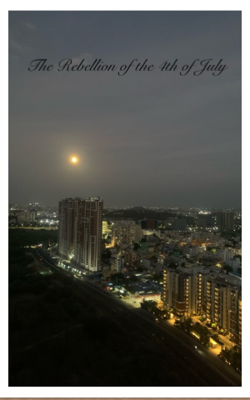