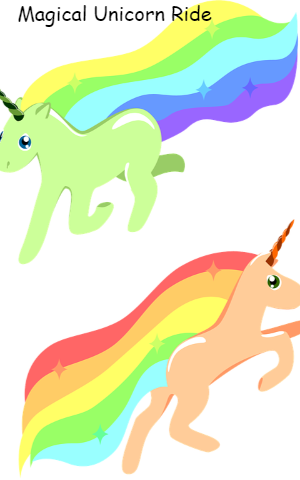 "I haven't chosen a present for Thea for her Birthday which is day after tomorrow "Lily said to her mother Saina after she looked at the Calendar. Thea was Lily's sister who lived a few miles away.

"Don't worry, you think of something and your Father Brown will help you to make it" said Mommy.

"I guess so, "replied Lily frowning. "Cheer up Lily, Just think hard about what she likes the best and –".

"-yes yes she likes Unicorns, maybe we could make one out of clay and and- "Lily stopped in her mother mid-sentence. "Don't reveal your secret let it be a surprise "said mommy again stopping in the mid-sentence of Lily

After a steaming cup of tea, both Lily and her father went to the garden with a huge bag of clay to build the unicorn. "How big you want your unicorn to be Lily "dad asked. "As big as the size we could sit and ride on it dad "replied Lily." We can try "said Dad. Then an idea struck in his mind. "How about we use my magic Spell to make the unicorn fly "he asked after being a famous magician for years. "Brilliant idea Dad Bravo" exclaimed Lily with excitement. "Remember we haven't started a pinch of building the Unicorn, "said dad while giggling, seeing the very excited face of Lily

Unicorn in the making

"First we have to start making the face. Roll a ball of clay and detail it with horns, neck and a nose "instructed dad. Lily rolled up a clay ball and detailed it as instructed by her dad, but was messed up with clay all over her dress. "Finished "said Lily. "Now the body" said dad. After giving the instructions to make the body of unicorn. "No too skinny". "Too fat ","just right "corrected dad while Lily made the body. "Completed "said Lily after finishing the unicorn body

After finishing the clay print." I will now chant the magic spell. Fly high rise into the Sky" he chanted and taught it to Lily. "Chant this spell to make the unicorn go up and down "down down land on the ground" to make it land "Dad said and taught Lily a few more spells to control the directions of Unicorn. "In the Evening when the clay model becomes stiff, we can go to the market and buy the paint, which we need to paint the unicorn "he said '' Yahooo!! I can't wait " said Lily steaming with excitement

In the Evening after buying the paint cans "Let's start painting but we should first wear an old dress because we may get paint all over our cloths "said Dad. After wearing the old cloths, "It's up to your choice Lily, Call me if you need any help "said dad and went inside leaving the Diaz to Lilly. Lily started painting and she painted the body white, horn pink, and nose light brown, tail multi-color pattern, hooks on the legs light brown and added some designs and even added glitter for shine. "Finished" Lily shouted in delight after painting the Unicorn. "Fantastic! Bravo! "Said dad and mom when they saw the completed Unicorn. "We will let it dry over the night and Tadhaaa! We have our unicorn Finished "Said mom

The next morning Lily woke up bright early to check on the Unicorn. She was in delight as it was beautiful. Later that day she went to go for a ride on her Flying unicorn. She used the magical spells to get the unicorn on her control. After a ride to the park with her family it was just perfect. She could not wait to surprise Thea.

The Following Morning (Thea's Birthday) Lily woke up in the crack of the dawn to get going on her ride to Thea's house. "Dad, Mom is everything packed for the journey to the Thea's House "Lily asked just getting ready. "Almost there" said Mom. "Water bottles, greeting cards. Gifts and an Umbrella if it starts raining "while she was checking the list and putting them into a huge cloth bag and she knows using plastic is harmful for earth. "There, all finished "said dad seeing mom checking the list. "I suggest we take a strong and stiff Cardboard which is because there is only room for Lily to sit," said Mom. "And I could nail it to the Unicorn "dad said and nailed it to the unicorn

They were all set and sat on the Unicorn. "Remember the magic words Lily," asked Dad. "Fly High raise into the Sky," Lily said and the Unicorn started. "What a view " Said Mom. After a while, many kids and their parents gazed at the unicorn stunningly. Lots of Kids started to shout "Unicorn, Unicorn Come Down, Come Down, We want to see you, we want to see you " Lots of Reported and other people gazed at the Flying Unicorn. A Reporter Said " I only saw a unicorn on the television ,Now only seeing one with my Own eyes "Another reporter said, "Oh My God ! They do exist". And after a while the newspaper headlines said unicorn flying, people riding.

After flying a mile, Lily felt thirsty then dad spotted a juice shop in the ground below. "Lilly there is a Juice shop there. let's stop there to have a drink". "Yes my Mouth is parched "Mom agreed. "Lily do you remember the magic word to make the unicorn land?" Asked dad. "Down Down land on the ground" Lily answered. And the unicorn landed next to the shop. "let me park it in a safe place till then, You and Mom order some Smoothie " Dad instructed. As part of the plan Dad went and parked the unicorn in a covered parking stand and Lily and mom went to order 3 Smoothies. As soon as Dad come ,they all drank their smoothies and started to continue their ride

As they were looking for clues, they saw something colorful flying up. "It's our unicorn," shouted Lily. As it come closer they knew it was their unicorn. Some Kids were flying it as they had listened to the magic words Lily chanted and tried it."Hey! Stop" Shouted Lily. "It's too high to climb up by a Rope," said mom. "So Can we sky dive?, I secretly packed a large sky diving material and a parachute in case we need it " said Dad. "Perfect "said Lilly. "Put on the materials" said mom. Soon they were ready for Sky diving. "Ready! Steady! Start! "said Dad and all the three of them held on the sky dive and shouted. they reached the unicorn and Kids sitting on the card board said "Sorry! We just wanted to try it:" "It's Okay you could be our guests to the party "said Mom. "Thank You "the kids shouted in excitement.

"We are almost there "said Dad. "You could all shout the magic spell" he said. Lily and the kids chanted the magic spell and they reached Thea's house

As soon as they reached Thea's House, "Thea! Happy birthday! "shouted Lily as soon as they reached Thea's House." Thank You!" said Lilly. Uncle Ted and Aunt Sally welcomed them in and gave them water and hot chocolate to drink. They began to chat with each other. "We haven't invited party guests ,you all are only our guests "Said Thea. We have gathered so many party guests here, these Kids over here are our party guests "Said Lilly. "Fantastic "said Thea." We also brought you a present, unicorn outside which run with magic Spell," said Lily. "OH! Thank you "said Thea

After a while they made cake for the party and gathered the decorations. They set them on the garden table and was about to cut the cake. When the wind blew so strong that the unicorn itself started to raise and the decorations started to float in the air. "Hey our Unicorn" shouted Thea.

"Don't panic "Said uncle we have an old Hot air Balloon in the attic, we could fly using that and get our Unicorn. Just as he said, the wind stopped and the balloon floated up in the air. "I have an Idea!" said Lily

We could have our party there, a Unicorn party No! A Flying unicorn party" said Lily. "Brilliant!"said Aunt and every one put the things like cake, garden table and decorations on the Hot air Balloon and flew towards the Unicorn and put the things there and surprisingly it could hold all of  them. "It is so strong "Said Lilly seeing how much the unicorn could hold. Every one celebrated a Grand Party for Thea.

"Happy Birthday to you "everyone sang and Thea cut the Cake. "This is the best birthday ever," said Thea. "All because of Lilly" she said. "Thank you "Said, Lily. Everyone had a grand time.