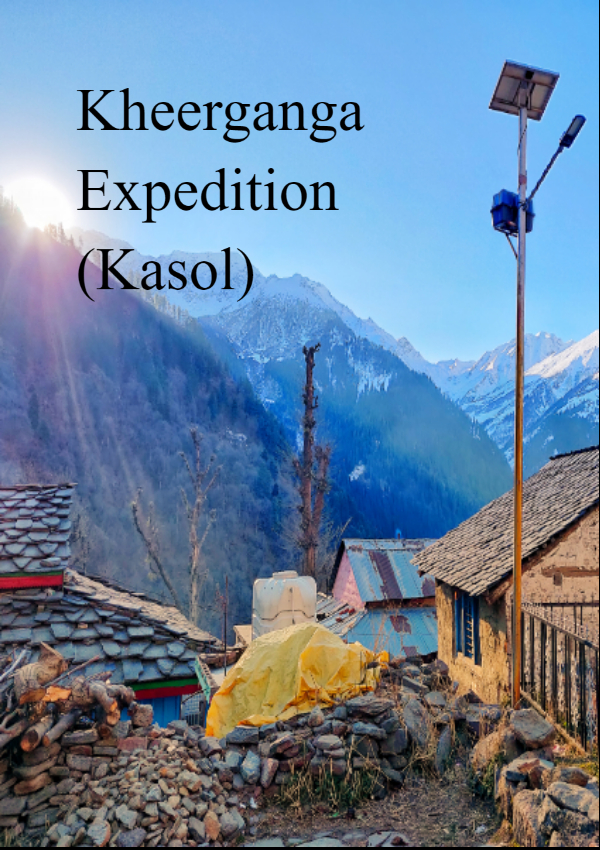 The last winter trek I went on was pretty disappointing as there was hardly any snow tough it was damn freezing at nights. So, this time I planned & researched a perfect expedition at Himachal. Most of the treks in India are closed during the winter phase as the chances of summit becomes jeopardy. Kheerganga is one of the treks which is open throughout the year mostly. I traversed the Parvati valley (Kasol, Malana, Barshaini, Pulga & Tosh) and Salong valley (Manali) in the span of 5 days.

Day 1 - Delhi to Kasol via Bhuntar

The best and cheapest way to reach Kasol from Delhi is by Volvo bus or HRTC which is around 14hours of Journey. Most of the buses stop at Bhuntar (It’s the village from where the road diverges for Parvati Valley, it is also the confluence point of Beas River with Parvati River) and you have to take a cab to reach Kasol which is another one-hour ride, you can also take a local bus which will cost you just around 20rs per person. Luckily I have booked a direct bus to Kasol from Delhi. Kasol is truly a paradise for all those who would like to smoke fresh cream of marijuana and for who are passionate about climbing the high peak mountains. It’s also known to be a mini Israel as many tourists from that country visit the place while some have even made it their home. You can see many signboards here are written only in Hebrew. By Mid-eve we went for Chalal lake trail walk, where you will come across the hanging bridge over the Parvati river and just had to amble by the side of the river following a narrow path. Chalal is basically a small 2hours trail where we can witness a beautiful sunset, and mesmerizing views, there is also a hot-spring pond where you can take a refreshing bath, as I was hungry already I went to a famous restaurant located at the heart of the kasol called blue moon café where you get all type of Israel cuisines.

We decided to take a local bus to reach Barshaini, the 1hour bumpy Journey takes you to barshaini which is the starting point for the kheerganga trek, you can find many locker rooms in the barshaini just for 20rupees where you can unload your baggage’s. The trek initially starts with a deep decline path and a hanging bridge underneath the beautiful river. 16kms is the total trek length to reach the summit and usually, kheerganga can be done as a one-day trek biased on the climate conditions. We began in the late afternoon without any guide or knowledge about the directions and it wasn’t what I expected, we were the only ones who were hiking by that time towards the summit. As it was the tail end of the year, the climate was freezing and the trails were very slippery. It took us around 4hours to reach the midway which is Rudranag. As it was already dark and we had no guide accompanying us so we decided to halt at rudranag. The temperature was falling extremely low (-17C) we stayed at “Midway camp” and we were the only guest at the campsite. Luckily we had the heater in our tent and had hot parrota’s with channa for dinner which was so delicious Thanks to daddha and dhadi for the accommodation.

We started to summit at early morning it was so windy and cold at the same time we need to ascend all the way to the summit., Rudranag is a beautiful small village with few campsites and freezing waterfall if you’re daring enough you can have a freezing bath in the waterfalls. As we kept going, the climb became quite difficult tough the trails were such a blessing to our eyes. At one point the whole path was covered with Ice which made it impossible to go further as the whole path was slippery. So we had to literally climb the mountain using our poles and few places were extremely dangerous to go further. Tough, I had no intention to turn back we kept climbing higher. Thanks to the fellow trekkers who helped us to cross a few slippery trails. We were just a couple of kilometers to reach the summit which is the harder zone, you need to cross across a big waterfall that was frozen due to extreme weather and we had no option to walk on that piece of snow. We crawled all the way down for few meters and slipped several times, we dint take any ropes, my fellow trekkers had their heart in their hand as it was their first time. After a long ascend, after crossing all the obstacles we reached the summit around 10 am and I was so happy seeing the beauty of nature and snowy mountains from the top as all our struggle paid off. I was having a hot chai around the mesmerizing mountains and I never wanted to leave this place though we have to start our descent before the sunset. On our way back obviously our pace will be faster and we had reached the base camp within 4hours, we stopped only in a couple of places for hydration. As soon as we reached the base all of us were so exhausted tough we have to reach tosh for our stay at that night which is 4km away from base camp.

The Next day morning, we tramped the streets of Tosh village, temples, and beautiful mountain cliff café’s. Tosh is a hidden gem in the quaint of Parvati Valley. The village has become quite popular with travelers who are looking for a Jaunt, meditation/yoga, and clean air. The travelers who come to Tosh are mostly backpackers from Israel and Europe. The distinct smell of Marijuana is the first impression of Tosh. If you go deep into the village you will find the Marijuana farms. Parvati Valley is incomplete without visiting Tosh. By Mid-day we started to our last destination Manali via car which took us around 4hours. We checked in the rooms and went for a walk around the town, little did we know, what was going to come? It was the movement I have been waiting for all these days, the snow started to pour from all above the dark sky like beautiful twinkling stars. I was amazed and very much excited as we all started dancing in the snowfall, after an hour it started pouring pretty heavy and I was having a cup of my favorite hot chocolate staring at the snow patches and twinkling stars all night.

Coming day morning, as soon as I came out of the room cold blow in a gust over me and the whole city was covered with snow, the scenery was totally different with full of white patches around. We were initially planned to visit salong valley but due to heavy snowfall the road has been temporarily blocked and we had to stay back at our hotel. None of us we disappointed that we couldn’t visit salong valley as we were playing snow cricket with the locals over there and were sculpturing snowman, these moments were exciting, pure joy, and blissful as it brought out my childishness & childhood memories inside me. Later, that evening the weather became extremely bad and we had to leave early to catch our bus to Delhi.

This expedition was self-learning to me. Take care. Stay home safe!