An old farmer was working on his land approximately 3 kilometers from his village with his 2 sons in very high-temperature weather in the month of July. Suddenly they saw a small child crying whose age was about 6-7 years on the road near their land.

He was crying so loudly.

He was wearing Small t-shirt and half pants and was barefoot.They can't see his mother or anyone else there.The child was all alone. One of the farmer's son went to child and asked him about his mother or with whome he is. But child continued crying.

Farmer's son took him to their land and they took him under the shadow of a tree and gave him water. They were trying to make him stop crying and were making funny sounds and faces to make him laugh.But boy continued crying and after some time boy become tired and slept.

Farmers were worried about him and were thinking that whose child he is.

After some time boy woke up but this time he didn't start crying suddenly and was saying in very polite voice "mumma, mumma, mumma". He was looking very afraid. The farmer's son asked him very gently that where is his mother. But boy didnt said anything now. They asked him about his house and boy replied by saying name of village ' Beempur'. It was the same village where farmers belong but as village was very big so they didn't recognise him.

The old farmer told his sons that they should take boy to SARPANCH'S HOUSE (HEAD OF THE VILLAGE).When they took him there sarpanch also tried to ask boy about his mother but he didnt gave any useful answer.

They asked him how his mother looked. Surprisingly boy said "My mother is most beautiful ". The farmers and sarpanch were surprised by answer. They again asked boy can you tell more but his answer was same. So they decided to call all the most beautiful womens in village. But when they were called no one's child was misplaced.

Now everybody were worried.They decided that they should once more announce in whold village that if anyone's child has misplaced please come at SARPANCH 'S house.

Suddenly after 10-15 minutes of announcement one lady came and was really worried and crying and was repeating name 'bali, bali, bali '. Maybe that was the name of the child.

She claimed that child is her's and even boy just ran towards her after seeing her.

But everyone was shocked as boy told them that his mother is ver beautiful but that lady was not actually beautiful. She had dark coloured skin and some white hair and was wearing dirty clothes.

Everyone thought maybe boy didnt even know that what is BEAUTIFUL and he was nit saying it seriously.

But old farmer smiled and said " This boy has taught us very big thing today".

He said, "For every child, his or her mother is most beautiful in the world". 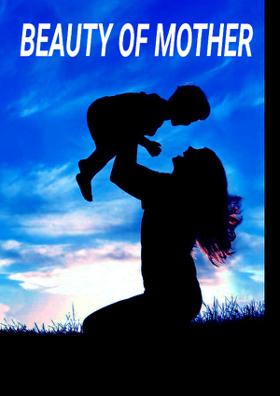