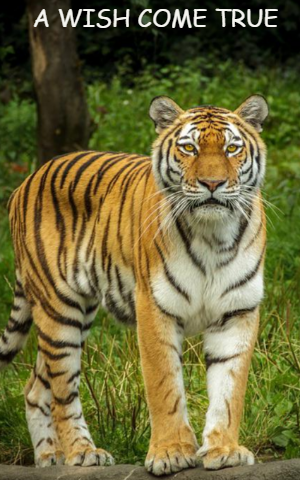 Tigers, tigers are known to be vicious and dangerous animals but this story will change your mind or perhaps even surprise you.

The story starts when a 5-year boy named Tom was having a tour at the Zoo of animals. There Tom was fascinated by a tiger, he was so fascinated that he wanted to have a tiger. His parents tried to persuade him but Tom as stubborn as he was, refused to understand. As days passed Tom grew up, now he is a 10-year-old boy and he knew that his parents would not allow any pet let alone a tiger but still, he had a wish to have a tiger as a pet. One day on his way home from school he found a cat that looked just like a tiger. When he had a closer look he noticed that the cat was injured. He took the cat home and he put medication to heal him. After some days he was healed completely. As instructed by his parents, tom had to leave the cat now. So with a heavy heart, Tom went to set it free. But when he left the cat on the footpath near the woods and was about to leave, from the corner of his eye he could see the cat following him side by side. He was astonished, he left the cat again on the footpath and guess what? the cat followed him again. Again he left the cat on the footpath and this time ran towards his house, as he glanced at his side, he was surprised to see the cat running with him. After many trials, he gave up and carried the cat to his house. When his parents saw him holding the cat they asked him why had he not left it in the woods. Then he narrated what happened at the footpath, after listening, his parents decided to keep the cat as a pet. At this Tom was now the happiest person in the world. Now the cat was made the part of the family. Tom named the cat Cosmo. Usually, Cat loves to fish but this cat loved meat. It had the sharpest claws and the longest tail among the cats. Now the most unusual thing happened as Tom grew, Cosmo grew double. This growth was noticed only by Tom as he woke up for school. He observed that this can mean only one thing this cat is not a normal cat it is a tiger !!!! Now, he had only one job to tell his parents. When he went to tell his parents he saw his father seeing the news. That’s when he heard that the neighboring town saw a female tiger wandering on the street. Then it struck him, that the tiger on the news is the mother of the baby tiger he found on the street. The moment it struck him, he forgot to tell his parent about the tiger and he made the tiger jump from the window of his room and stay there while he went down the stairs and went out from the front door telling his parents that he was going to his friend's house. This time he took the tiger from the forest road which no one used. He took his cycle and the tiger followed him to the neighboring town which was not far away from his house. While traveling he remembered his wish and he suddenly realized that his wish came true. When he reached the forest grounds of the neighboring town he saw the tiger from the news. On seeing the tiger Cosmo went towards his mother. Tom was feeling sorry for the female tiger. He knew how the mother tiger felt and this thought reminded him to return to his house. This time when he went to his house Cosmo didn’t follow him. He was partly glad and also sad. He went home and his parents asked where Cosmo was? He told the truth about Cosmo and how he took him to his mother, In return, his father bought him a cat that had black spots just like a cheetah, now lets hope that this is not a baby cheetah.