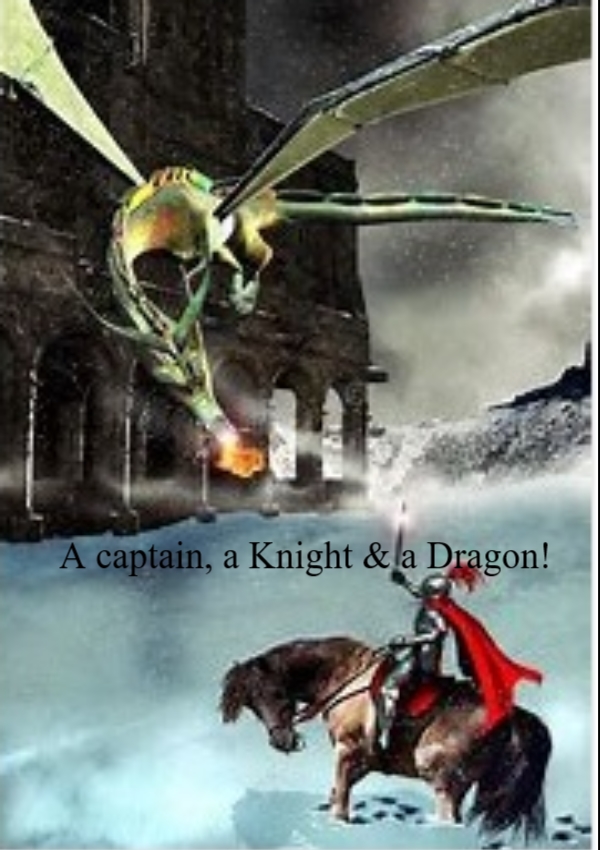 A Captain, A Knight And Dragon!

A Captain, A Knight And Dragon!

I couldn’t see, everything was so dark, but somehow my mind and body were into my awareness, I felt different, like a new person……

I was a captain at sea! Battling the fierce winds and tides, I looked around and saw my comrade’s, “the scaly wags” I thought, for they were crouching in fear. Suddenly the cabin boy offered me tea, I shot him a filthy look but took the tea anyway, after all, nothing is better than having tea at sea! But then without any warning, I fell off the deck and plunged into the sea…

After a sudden stop, I found my self in a battleground… what was happening I had no idea at all, but what I did know that I ought not to be there. Suddenly I heard a tremendous roar, I turned around only to meet my greatest fear…. A Dragon! I don’t know what but there was just something with the tail and fire breathing mouth. I ran to take cover, the situation was so violent and pandemonium, but in all my panic I did not realize that I was holding a sword in my hand, I was wearing a shiny suit and armor too, I never excelled in fencing but at that time I just swung my sword and the dragon was on the floor with its head a foot away from its body. Something about it reminded me off aunt Selina after I destroyed her brand-new Italian shoes. I wanted to sit down and enjoy my victory, but then something or someone pulled me away….

It felt suffocating but the tight grip never loosened, suddenly I was on the hard-sandy ground. I looked up and saw a crowd of a thousand! They all seemed to be chanting my name. I got up and observed myself, I had a different body, I was taller, leaner and more muscular than my usual self (which, trust me is none of these at all!) I looked around only to realize that I was smack in the middle of a racing track! I had no other option but to take my place at the starting line. But somehow, I felt confident, like I have done this a million times before. I took my place along with other racers and the whistle blew, my legs automatically started to move and I gathered up speed, and before I knew it, I was the lead! I maintained my pace and crossed the finishing line! It felt amazing. But a loud scream came out of nowhere, an ear-splitting one, saying my name, no it wasn’t the crowd, but then from where?

I was being shaken awake roughly, “wake up Lucien! Oh, foolish boy, sleeping in your school dress! Ugh, you spilled milk all over yourself! Wake up this instant!”. I woke with a start, I looked around… I was in my room. Outside, I saw my sleepy little French village. “maman, let me sleep, it’s been a long journey.”

Maman looked at me, speechless.

My tale in poetry

My eye sight was going hazy,

I think I was going crazy!

Then all of a sudden, I fell into pitch darkness….

My mind and body were into my awareness.

Suddenly I was a captain, voyaging in the sea!

With one hand I was steering the wheel,

With the other, I was sipping tea!

Without any warning, I plunge into the sea,

I was moving with rapid speed,

Faster than horses in a stampede!

Then all of a sudden, I came to an abrupt stop,

And then I saw a sight, which made my jaw drop….

I was in a battle arena,

I was face-to-face with a dragon!

Which, by the way, was scarier than my aunt Selina

I was scared, there was nothing I could do to make this stop!

So, I swung my sword, swish, and chop!

And the dragon's head was clean off!

My victory lasted a second before,

Something caught hold of me and pulled me back,

And I found myself in front of a racing track!

I felt muscly, lean and tall,

Was I scared? Not at all!

So, I took my place at the starting line of the race,

The whistle blew and thus began the almighty chase.

With me at the lead!

And lo! I was the first to cross the finishing line,

The winning sensation was so divine!

Then all of a sudden, I heard my mother scream,

Wake up Lucien, snap out of this dream!