All He Had To Do Was Stay

All He Had To Do Was Stay

She woke up from her sleep,

Today she had many promises to keep.

For her it was a very special day,

Because today was her birthday.

As her mother dressed her,

She said, “You look so much like your father.

I know that you are missing him dear,

I too wish that he could be here.”

Every now and then she glanced at the phone,

Without her father she felt alone.

Wishing for a miracle she prayed,

But lack of a call left her dismayed.

“Let’s celebrate”, they all cried.

She blew the candles, cut the cake,

But everyone could see that her smile was fake.

Everything seemed to be going alright,

The party went on till late at night.

Finally she bid her friends goodbye,

However, her father’s absence made her cry.

Suddenly she heard the phone ringing,

And then with a gun in one hand,

And the phone in the other,

The soldier sang the birthday song.

She laughed and danced in delight,

Nothing could destroy her spirits tonight.

Her dad had promised her a gift,

From sad to happy her mood did shift.

Next day brought another call,

This one however made her world fall.

It was not her father on the other end.

Instead an army man, her father’s friend.

Two days later she was standing,

And in front of her was a glass box shinning.

The sight before her filled her with dread,

As inside the box, her father lay dead.

The funeral passed away in blur,

But the girl stood there without a stir.

She cried, she screamed, she called out,

But there was no one to hear her shout.

She asked her mother, what was her fault?

Why did the terrorist not halt?

Why was her father taken away?

When all he had to do was stay. 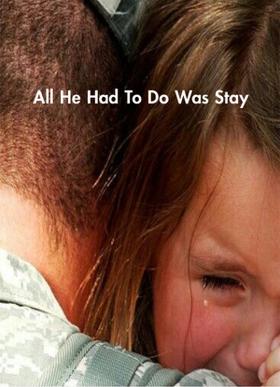