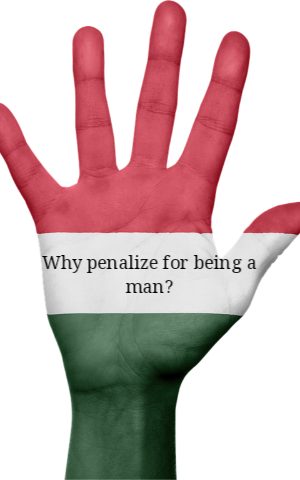 Why penalize for being a man?

Why penalize for being a man?

There are many roles a man plays just like a woman. THEN WHY ARE MEN BEING PRESSURIZED BY THE SOCIETY?? Ever given a thought?

Men are often seen as incompetent, misogynist, brutish slob who only think about their pleasures. Society constantly asks men to choose between being sensitive ninnies or aggressive bullies.

Every person out there demands EQUALITY, which cannot be achieved by misunderstanding the concept of FEMINISM [It demands equality of the sexes in all respects.] So supporting male gender does not prove that one is anti - feminist.

From the past, everyone has heard a popular dialogue in Hindi - "mard ko kabhi dard nahi hota." However, every person irrespective of gender has feelings. It is just a matter of expression. More often females are way too emotional and sensitive. This nowhere gets us to the conclusion that men do not feel the pain. Even a man requires a place where he can cry his heart out when needed. Men absolutely suck at handling mental illness. They are experts at pretending there's nothing wrong - even if they're dying inside.

Men and boys are also unseen victims of rape and sexual assault. The only difference is there is no clear language and only a few outlets for them to communicate and often a society-driven reluctance for them to come forward.

There are many women who are unaware of their rights and those who are aware misuse them. Social media is a kind of platform where if a girl says that so and so person had molested her or done something wrong to her everyone blindly and baselessly believes the words of the girl even without asking for proof result being unfair trauma and agony to the innocent men (at times even resulting in suicides).

In a family unit, it has long been assumed that men should be the providers for their family. Even in a family where the wife is also working, husband is still held "responsible" for making sure the family is financially OK.

Thereare many places where Moms are still seen as the default parent, the one who is more "natural" at the act of parenting and taking care of her children. What can a Father do when he is not allowed to take paternity leave? Working Moms are given maternity leave to take care for the child and so equally working Fathers are to be given paternity leave to enjoy those moments, enjoy his parenthood & take care of their child. Dads are clearly present in the lives of their children, but Stay-At-Home-Dads are still not seen. And yet, men are not supported in learning about their roles of becoming a father in the same way that women are taught about becoming mothers. Men also find enormous difficulties when it comes to divorce and custody. The thoughts will remain unchanged as long as men’s role is restricted as financial provider who is incapable of nurturing.