There was a man who had three sons, but no fortune, expect the house he lived in. Now, each of them wanted to have the house for him after his death; but their father was just as found of one as of the other, and did not know the how to treat them all fairly. He did not want to sell the house , because it had belonged to the forefathers, he might have divided the money between them.

At last, an idea came to his head, and he said to his sons: ``Go out in the world, and each of you learn a trade, and when you come home, the one who makes the best use of his handicraft shall have the house."

The sons were are quiet content with his plan, and eldest son decided to be a farrier, the second, a barber, and the third, a fencing master. LThey fixed a time they would all meet at again, and then they set off.

It so happened that they each found a clever master with whom they learned their business thoroughly. The farrier shod the king's horses, and he thought, " if I am afraid of a blow. I shall never get the house."

Now, when the given time has passed, they all went home together to thier father, but their didn't know how to get a good opportunities of showing off thier powers, and set down to discuss the matter.

Suddenly, a hare came running over the field.

"Ah !" Cried the barber, she comes just in the nick of time. " He took up his bowl, and his soap, and got his lather by the time the hare came quiet close, then soaped her, and shaved her as she raced along, without giving her a cut or missing a single hair. He father got astonished , and said. "If the others didnt look out, the house will be yours."

Before long, a gentleman came along in his carraige at full gallop.

"Now, father, you shall see what I can do," said the farrier, and he run after the carraige tearing the four shoes off the horses as he galloped along. Then without stopping a second, should with him new ones.

"You are fine fellow, indeed, "said his father. "You know your business as well as your brother's. I don't know whom I shall give the house to at this rate."

As it was beginning to rain, he drew his sword and swireld it round and round his head, so that not a drop fell on him.Even when the rain grew heavier, so have it seemed as if it were being poured from the sky out of buckets. He swung the sword faster and faster, and remaind as dry as if he has been under a proof.

His father was amazed, and said: "you have done the best; the house is yours."

Both the other brother's are quiet satisfied with his decision, and as they were all so devoted to one another, they lived together in the house, Carried on their trades, by which they made plenty of money, since they were so perfect in their trades.

They lived happily together to a good old age, and when one fell ill and died, the others grievied so much over him that they pined away and soon after departed his life.

Then, as they had been so fond of one another, they are were all buried in one grave. 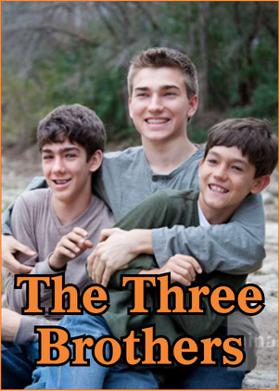