The joke that cost a life.

The joke that cost a life.

Once upon a time, there was a boy who was very naughty. He was never serious because of his naughtiness. Everytime, everywhere, with everyone he applied his pranks. Also most people complained about him to his parents but he didn't mind anything. He used to carry out his bullying in the same way. This made their parents very sad. Sometimes and all the day they used to think about this problem even not sleeping at night. Once her mother beat him with a lot of abuse; she abused him in very lurid and cruel ways, screamed at him, and explained to him how nasty he was getting every day, but he refused to listen to anything. His parents were tired of explaining to him the consequences of his bizarre fooling and escapades. But there was no improvement in his behaviour and activities.

One day he resolved on joking with his parents. Seeing the opportunity, he sneaked up to his mother and started his mischief. He told his mother that a call had come, in which a man said that when his father was going to work he had a severe accident in which he died on the same road immediately and he was completely bleeding and his bike was completely broken. At first, his mother didn't mind or listen to anything because she knew perfectly how mischievous her child was. She scolded the boy and said, "Stop making a game of your father and go and complete your homework."

But his joke was not completed. He said to his mother, "Take my phone and dial the recent number."

She dialled that number and that was a piece of true news! But the dialled phone number was that of a naughty friend of her own child's. They both had made a plan for playing pranks on the parents. The boy had told his friend how to play that joke on his mother. So, he told everything in keeping with the prank they had together planned.

His mother was very worried. She cried and started wailing very loudly. And on hearing this, there she fell to the ground unconscious. The boy was horrified to see his mother. He now started worrying about why she had suddenly fainted. But she was not unconscious. She was dead! He immediately called his father and told him everything and urged him to come home soon. His father instantly left work and hurried to his house.

Now the boy realized the essence of his mother's advice: " Always do work that gives happiness to you and others as well, and not anything that gives pleasure to you but hurt to others."

Now, he understood everything and corrected himself, but he was always sorry for his mother and missed her every moment. 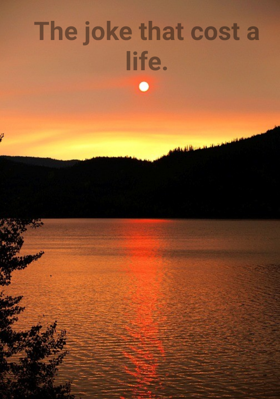