Story Of A Corn Seller

Story Of A Corn Seller

Once upon a time in a village, there were three best friends Ravi, Kishan and Shankar. Their wives were also best friends. Ravi, Kishan and Shankar had a farm. They used to grow corn and sell them. Corn was fresh and juicy so everyone would buy them. Then the money which they would get they give it to their wife to safe for the future. After the wife would finish their work they would sit at a particular place. They would chit chat for some time and then they would go back home and do their work.

One day Ravi, Kishan and Shankar were discussing that their wives are wasting their money. Then Ravi said that "if we will not save money now then we will have nothing for future". After some time they told their wives that you have wasted money now you have to do business and collect money which you all have wasted. After Ravi, Kishan and Shankar's wife finished their work they gathered and started to think about what business to do. After some time Ravi's wife told that we should do a business which is not started yet in this village. Kishan's wife thought that we should start to sell three types of corn. One will sell normal corn, one will sell fried corn and one will sell fried corn with lemon and black pepper. They told their idea to their husbands. Their husbands agreed to it. They took a tent on rent and started their business. They collected all the money which they have used and gave to their husbands. They told them that they will continue their business. Their husbands allowed them. The three continued their business and helped their husbands also.

Moral: Money is valuable, save it for the future, only use when needed. 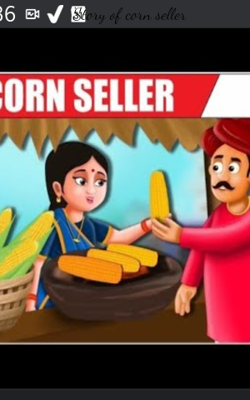