We, the six students of class five, eventually friends, decided unanimously, to play 'Holi' (festival of colors in Spring). At first, we tinged the feet of Radha and Krishna with red color and bowed them. We did the same to our elders. Then we played 'Holi' among ourselves. Everybody's face was colored red, everybody looked alike. It was hard to distinguish who was who. However, we continued the merry-making for about three hours and we were deadly tired. Sitting under a banyan tree, we rested for a while when an idea cropped in my mind.

"I can make rasogolla if you subscribe one anna per head"

The five jumped at my proposal. With that six annas we bought all the ingredients. I became the self-styled director. The five pairs of eyes were rolling as I was moving hither and thither. They were also eagerly waiting for my instructions. I instructed one of my friends to prepare curdled milk by adding lemon juice to boiling milk. Another was instructed to make a syrup-like liquid by adding sugar to boiling water. Two friends were told to smear 75% curdled milk with 25% flour by vigorous rubbing. The remaining friend was told to make marbles(size and shape of playing marble) out of the pulp. When everything was ready, it was my turn to show my charismatic power of making rasogolla. My five friends kept a constant gazing at me. I became the cult figure in their eyes. I was overwhelmed with pride and joy. I began to dip the balls one by one into the boiling syrup of the cauldron. It was expected that the swelled balls would come up on the surface. But it did not happen. My joyous pride began to fade. I lifted a few marbles which seemed to be reduced in size and become greenish in color. As I tried to hold one of them between my thumb and forefinger, it slipped out and struck against a wall. The ball made several bounces on the floor and finally rested in a corner. I could read their minds, that they would, at one time, make a joint assault on me. In order to save my skin, I hastily put forward a second proposal of making pakora out of rasogollas. This made them instantly and doubly angry. Their cult figure had cut a sorry figure. I pasted the slippery balls with powders of gram and fried in deep oil. The shape of the novel pakora was irregular but the taste was agreeable.

Pakora could not revamp the dampened spirit of my frustrated friends but I had a close shave. 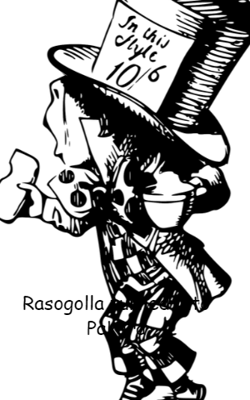