Breaking shackles thwarting her flight, path to victory she led

Her feisty self embodies the umpteenth qualities of red- zest, courage and power. She can bounce back from the deepest of pits to quench her thirst of exploring terrains deemed out of her league .

To the world an invincible queen, adorned in majestic crown

For those dear, a nurturer wrapped in hues of earthy brown.

Her gritty side doesn’t deter her from embracing the tender and compassionate facets of her personality. Pure and unadulterated love she bestows, binds the entire family together.

Shaded in tints of imperial purple, a regal charmer

Her exquisite aura, a reflection of her resplendent persona leaves behind its trails in the minds of many.

A quest for liberalism, fuelled the lucent yellow side

Her zesty spirit now sailed on an ecstatic ride.

The yellow colour perfectly captures her childlike playfulness which seeks exuberance without any constrains.

She unleashed the hidden shades of grey.

An intricate being she is composed of both good and bad. If circumstances compel ,she lets her darker side rule at times. 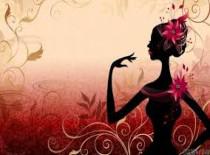