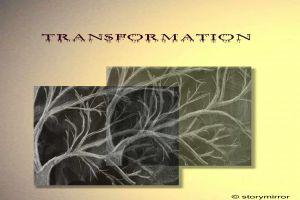 The peepul tree was old. Really old. It had seen some six generations. Three hundred years, perhaps more. Each generation of the village had grown from birth, transitioned through youth and old age, and finally death, falling to the scythe of the ultimate reaper. Some peacefully some horrifically. Some in youth some in prime.

The joys and desperations of the village people in all these past few hundred years had been experienced by the old peepul tree.  Tides of time came and went. The child grew…… the old man died,  but it  stood silently like a permanent sentinel quietly recording the lives and times of each   individual, the upheavals in the village, the joys and the tragedies , the marriages, births, deaths, all had become an inseparable part of the peepul.

Over the years the tree  grew, grew, and grew right in the centre of the crossroad of the village. Its humongous size and the vast green canopy of leaves was a welcome sight to all. During the passage of time, a round circular chabootra had been constructed around it.  Travelers and passers-by took advantage of its shadow, and the cool breeze that emanated from its multiple leaves.  Children played under it, old men sat, young men slept after  hard days at the field. The peepul welcomed them all and wished that they never left him.  For, you see, it  never wanted to be lonely.

And lonely it never was. Whether day or night, rain or shine. The peepul had become possessive of the people of its village. Whenever anyone died the peepul grabbed away the departed soul from the reaper and took it in the fold of its leaves, rocking each one gently.

The tree was happy with its children happily rocking away in its leaves, some residing in the leaves for long,  or till such time came  for a soul to go to heaven or to the netherworld  or to  take re-birth  in the village or surrounding area.

Each day early dawn was glorious. No matter what, it always dawned gloriously in the village, whether rain or tempest, summer or winter. The sun’s golden rays filtered through its thick foliage, the residing souls chanted hymns to the praise of the lord. Yes, those early chants, though distant, could be heard by the living souls going away on their early errands to work in the fields or some other chores. Sense of a spiritual well-being and oneness prevailed thorough out. Truly peepul was spiritual in its possessive sense and nature.

It owned the souls of all departed. It acted as an extension counter of Gods judgment on the departed souls of the village. Except it could not own the soul of Mehul.

In fact, even the reaper could not take away Mehul’s soul away for judgment. Mehul had died some hundred years back. Had died a very sad man. The reaper had not come for him. His life, not yet on the threshold of prime was snuffed away by his own sons and relatives through greed.  Greed of the vast lands he had owned. Mehul was almost the mini raja of his time. A true son of the soil, like this father before him, through sheer hard physical work and mental shrewdness, he grew from a successful farmer to an influential land lord.  His word was the say in the village, the affection of all in the village, except for his sons and relatives. Lazy sycophants and good for nothings all. Like parasite they had were siphoning off on his hard-earned wealth and fame. No one dared to protest against their atrocities, not because of fear but the high level of esteem that Mehul enjoyed.

The old peepul had witnessed snuffing out of Mehul. That night the old peepul was sad. Voices were heard under its foliage, angry voices in silent crescendo, yet not loud enough to disturb the sleeping villagers. Mehul was limp supported by some of his ungracious kith and kin. His neck hung to one side as if broken. A fatal blow had done its work effectively.  A rope was strung over the peepul’s  strong boughs ,  a noose made and put around Mehul’s already  broken neck, and some time later Mehul’s body hung under the bough swinging in the strong wind..

Mehul’s soul moved under the peepul distraught, the reaper passed by it on his usual rounds of soul gathering, but not touching Mehul’s soul. It was too noble for him to gather; besides Mehul’s time on earth had not yet expired, but his residing body was useless. Reaper bowed respectfully at Mehul’s soul and even his fearsome eyes bore the sad and pitiful look.

“Come, son, fold into my embrace,” the peepul whispered in a grief-laden comforting whisper of its leaves to Mehul.

If there was a picture of grief, if a Spirit ever wept silently, it was Mehul’s. Not a whisper of acknowledgement from Mehul, now just the Spirit with unfulfilled missions and desires retreated at the foot of the massive peepul tree. The peepul could sense that the Sprit sought retribution.

The old tree was spiritually noble, it over the years, like a parent to child, solaced through soothing whispers the Spirit. It told him about the Karma, life, missions, life after death, attachment to material things in the lifetime, attachment and detachment to living body. Gradually over many decades the spirit grew placid and calm, and all that is good and spiritual poured and enveloped it.

One fine dawn, a heavily laden Nagin (female cobra), after many years, sought refuge in the holes at the bottom of the peepul tree, to seek a safe haven to lay its eggs peacefully. The Spirit saw the nagin laying the eggs, and the desire to take birth nagged it.

After few months the nagin crawled out and left with its brood in tow, except for one, the white one with red eyes, it stayed back at the foot of the peepul. It could not leave its wise foster father the peepul. It was the rebirth. Re-birth for Mehul.

Every day in the early hours the sapola crawled out from the underbelly of the peepul to bask in the sun. Its white skin glowed silvery gold, and its silent red eyes gave it a brooding spiritual look.

Small children playing near the peepul saw, and started throwing stones at it in a playful manner, perhaps part out of fear, part out of sadistic fun. The snake stretched and lay quite and made no effort to slither away. This continued for many years, the snake grew and grew till it looked like the silvery shaft. Gradually the village people, because of its unique skin, began to rever it as something spiritual. It harmed no one, and was there at all the occasions, being held near the peepul tree.

The snake was at peace with itself. Its inner spirit did not want to seek retribution, and in reverence it looked at the peepul, for all the goodness inculcated and infused into it. With this goodness brimming in its sprit, the snake started to look more majestic and holy. Now, the unfortunate termination of his previous life had no meaning, his sons and relative paid for their doing. Some died penniless, some died untimely, till no one remained to manage the vast lands that the snake had owned in his previous birth. The lands went to the village, were distributed amongst the harijans, it gave a great inner joy to the snake. The true meaning of life and sacrifice and its related joy had dawned upon it.

This was the transition and turning point within the snake, it grew more and more spiritual, and love for God and all that is spiritual and beautiful grew within it, and further was grounded firmly by the teachings of the peepul tree. The snake transformed in appearance, and with the silvery skin, it looked more glorious and full of reverence.

All festive occasions saw its presence. Whatever the occasion was, and wherever it was held the snake was there. Whether it was the birth of a child, the death of a person, whether at the village meeting, prayers a the temple, festival, the snake was always there. In fact, its benign presence gave a sense of blessing to all present. Villagers grew to like it and never forgot to offer it milk at the foot of the peepul tree.

With the passing years, the snake grew old, so old that it could not crawl beyond the foot of the peepul tree. It now wanted to be close to its foster father, the peepul tree. People revered it and offered it milk and prayers on the naag panchmi. In return, whatever the villagers prayed for was fulfilled.

The snake became the Holy one, and was offered daily prayers, without fail.

However, all worldly bodies come to an end.

The end comes to the snake. Old age was the cause. It died peacefully under the foot of the peepul one fine dawn. No reaper came to take its soul away. It simply floated away on the rays of the rising son to the abode of the Supreme.

The village was sad, as their revered one had passed away. A Samadhi (monument) was built containing the remains of the snake at the foot of the peepul tree.

Till this day, people offer their prayers to the Samadhi of the snake, the Nag Baba. They do not care if its blind faith, as long as all their prayers are heard.

Years have passed now, the Samadhi of Naag Baba is still there, the peepul with its vast canopy is still the guardian of the village, now content and happy for Mehul.

[1.Peepul  tree is much revered tree in  India
2.Sapola  is a new born snake incase of cobra
3.Nagin is a female cobra
4.Samadhi is a monument may or may not contain the mortal remains of a holy being]

A spiritual story of reincarnation