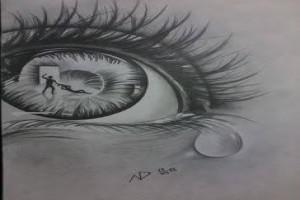 Sleepless nights she had spent imagining the blissful future that awaited her. The very thought of marriage lit up her face with a luminous smile. Her cheeks would turn pink. How excited she was to be married!

She dreamt of a life full of love. To cuddle up in the arms of the man she adored was a beautiful feeling. To have someone to care for, to be cared by, to shower affections and to share the heart's intimate desires was wonderful. She longed for a blissful marriage.

Megha Dutta soon became Megha Chatterjee. With that came a string of changes. It changed everything. Her routine, her attire, her chores, her ideals, her thoughts, her beliefs, her dreams and even wishes lost their own color and imbibed the color of her husband. Under the burden of her odious marriage, her poignant dreams died an untimely death. Her world came crashing down the day he arrived home drunk. He shouted, hurled abuses, muttered curses and broke furnitures. The helpless Megha stood in a corner weeping copious tears. Gradually, this became a routine. Her husband had progressed from verbal abuses to physical ones. Her fair body was covered with purple patches -  a silent proof of her misery.

Her nights were sleepless again. She kept crying and screaming into the darkness of the night. Her wounded heart longed for a mere ray of hope. It protested, told her not to yield in, provoked her to break free from the salvage. And then her mind played it's part. She remembered her parents, she remembered the society and it's impeccable judgments. She knew she could not fight against the tide of society. From a mere victim, she would effortlessly be transferred into a woman of loose morals through eyes of society. She felt breathless trapped in the web of social stigma.

One and on kept pouring the heavy downpour. Megha stood by the pane of her window watching the raindrops touching the ground. The roar of the tremendous black clouds echoed in her eardrums. The twirling dance of the raindrops amused her. She watched the shower wash away all dirt from the ground. She wished she too could erase off all pain, all suffering. And then suddenly she decided to fight her own battle. The thunderstorms had instilled in her a steak of courage. She knew she has had enough. She decided to break from the silence and solitude. She realized that her indomitable spirit could never chain in to the animal instincts of a ruthless man. Gone was the fear. Gone was the breathlessness. With that decision came strength. Out of an innocent, docile wife emerged a powerful, brave woman, independent of any man's identity, refusing to relent in. She picked up her cellphone and dialed a number.

"WB Police," came the voice on the other end.