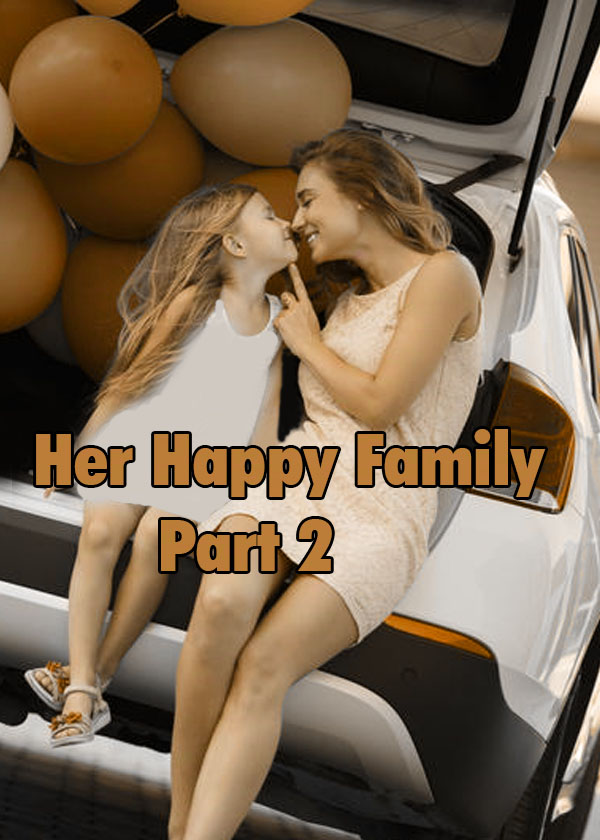 She started the car again. She was really late for work, but she had to drop Meenal off at home first. A few minutes later, they stopped at a traffic light. Rijul noticed that Meenal had suddenly gone quiet, as if the talk about the cruise had never happened.

“What’s wrong? Having second thoughts about the cruise?” Rijul asked.

She noticed Meenal staring at a billboard for a Life Insurance policy. It had a picture of a typical Indian family. The right male-female ratio and the right smiles. Thank god, the light’s turned green. She quickly put the car into gear and drove on.

Silence abounded in the car. When finally Meenal spoke up, she was careful in choosing her words, “Mom, are we… a happy family?”

Rijul was shocked. Where did that come from? Her girl was generally a very happy, chirpy individual. Where was this insecurity coming from?

“Why are you asking me that? Did someone say something to you at school? Or… did we do anything wrong?” She could feel heat rising in her cheeks and worry gnawing at her insides.

“No, no one said anything to me. Relax, Mom. Forget I even said it.” Meenal tried to play it down but Rijul was already wound up.

“Meenal, why did you say that?”

Silence again. But this time it was pregnant with anticipation.

“It’s just… sometimes when my friends or even other people are talking around us about their families, they notice us and they go all quiet. Like this one time, Piyali was talking about her family going out for a vacation, and when I entered the room, she shut up immediately. I told her to keep going, but she said, ‘No, it’s nothing great.’ You know Mom the whole group had gone quiet and they kept trying not to look at me. I just…” She threw her hands up in the air.

“You just what? You felt bad?” Rijul probed.

“No! Well… yes, but not the way they thought I would feel bad. Remember that time when Mrs Solanki told you that you must miss family time because Papa wasn’t with you anymore, you…”

“I told her my family is right here with me, I remember.” Rijul finished for Meenal.

“Yes!! Remember how later you told Nanu that you feel irritated that people would just assume that a family only means a man, a woman and kids. You said you felt complete with me and Nanu-Nani in your life.”

“Yes, I remember and I stand by it even now. But why bring that up now?”

“Well, I broke up with Piyali a few days back. We aren’t friends anymore.”

Piyali was Meenal’s best friend. Something really serious must have happened between the two.

“You want to talk about it?” Rijul proceeded carefully.

“There isn’t anything to talk about. After that episode I just told you about, I found out she would frequently go around telling our other friends how I must feel ‘abnormal’ whenever they discussed their families.”

Rijul was aghast. Kids could be really cruel sometimes. “She said that? That you’re abnormal?!”

“Yes Mom, Shweta confirmed it for me.”

Rijul went quiet. She didn’t know what to say because she was shaken to the core by this… revelation. Since the divorce, when she was pregnant with Meenal, she had tried her best to give Meenal a home that she could feel safe in, surround her by a set of people who would give her nothing but unconditional love and support. Of course people talked. But it had stopped bothering her after a few years, and eventually people had stopped talking too. It had been hard, so very hard, for her to raise her daughter and earn at the same time, but she didn’t want a penny of Mridul’s high society money, even when she was legally entitled to it. All she wanted from Mridul was to sometimes be a father to Meenal. She could manage the rest all by herself, thank you very much.

She was close to tears, when Meenal spoke up again, oblivious to the deluge she was holding back in her eyes. “I’m sorry I even mentioned this. I know it must be upsetting to you, but Mom, I don’t feel deficient in any way.”

Rijul steeled herself and asked Meenal, “Then why that question?”

“I just… I guess I just wanted you to confirm for me that a happy family doesn’t need a father or a mother to complete it… It needs happy people. I know you and Papa love me a lot, you just don’t love each other. But you two have always been there for me whenever I needed you. I have you, Papa, Nanu and Nani in my life. Dada-Dadi, they’re always sweet to me even if they don’t get along with you. I’m okay with all of that because I get that not everyone in a family gets along with everybody. Like Piyali and her sister. God knows how they’re even related, they hate each other. I know that what matters is that we should love and respect one another and support each other unconditionally… and I see that in this bunch of people I call ‘family’. I just wish people would stop looking at us like we’re broken just because we don’t have a man in the equation. You guys are my happy family and I wouldn’t change a thing about it.”

A treacherous tear escaped from her eye and ran down, falling on the fabric of her jeans with a loud plop that sounded louder because of the charged silence in the car.

“Oh god, Mom noooooo! You’re not going all teary-eyed on me now, are you? Oh man! I’m getting out of this car. This is so embarrassing!”

“And who’s fault is that? And you stay put in that seat, young lady. The car’s moving!”

Rijul laughed sheepishly even as happy tears slid down her face in gay abandon now. It was alright. Meenal was alright. They were alright. This was the stuff happy families were made of.