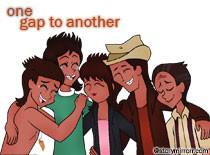 When you and I were holding hands, blissfully thanking fate

That I found your money too darn glittery to steal

And said, “You and I, are rich and poor but too young to feel.”

Then a constant in the equation of perception, vicious green note

Today, you parked your shiny wagon outside my humble dwelling

And entered the universe of a poor man’s helpless have-nothing-entity.

I reiterated, “You and I, rich and poor are too wide apart in fate to change.”

Despite the rules dictated by the so called courteous social strata.

Said it right, “we are all rich and poor, but in our knowledge

That keeps us burning every day, the money never really had a say.”

Laughing at the costly lunacy that kept us away, fools were we

No! The scary ghost of the once famed ostensible gap was never put to rest,

It still lurks the dark alleys of life, not knowing that knowledge

One Gap To Another