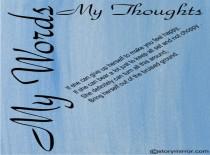 Playing hide and seek and land and water,

We enjoyed our time until our slaughter.

Sharing a tiffin and those angry pouts.

Then, "you better do your homework or else you'll get fired."

Quarrelling over small things, taking the issue as a global talk.

An epidemic known as age soon took over,

It killed those innocent smiles, and those Pygmy quarrels.

Making us taciturn and inimical,

Washing the memory and starting a race unconditional.

This epidemic proudly calls itself as time,

It's main motive is to demolish the happy carefree reign.

It destroys one remorselessly,

Until you beg for mercy hopelessly.

You are left with a less period and have many glitches to correct,

your life will stand erect.

If she can throw herself in love,

If she can be the peace keeping dove.

If she can sacrifice her entire life,

Keeping her identity as your wife.

If she can give up herself to make you feel happy,

If she can bear a lot just to keep all set and not choppy .

She definitely can turn all this around,

Bring herself out of the bruised ground.

She has the power to fight back,

Her potential and skill never lack.

Her love can change into anger,

Her sacrifice her strength,

Her impeachment is her loudest voice.

She can turn the whole system of your dominance,

She would not withstand the thought of abuse .

She 'can', she 'would', she ain't doing this because she respects the base of the society,

She has not kept it now as her priority

The day 'she will' the world around you will turn,

When she will get herself, her aggression out the universe won't spurn.