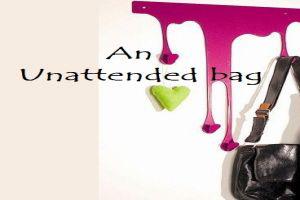 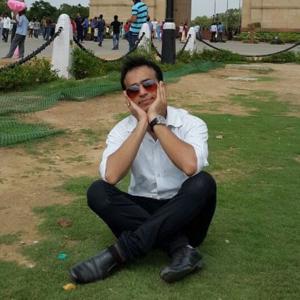 What I do not like in Delhi is catching a bus. Buses are always over-crowded here. I prefer travelling by Metro, but there are some places which aren't connected by metro and in such situations we have no option but to get ourselves kicked or buttered (whatever suits you!) to catch the bus.

I had some urgent work at Mother Dairy station. Unfortunately, there was no route to Mother dairy by Metro but by only bus. So, it was my time to kick myself to catch the bus because butter never excites me. I am a tough guy, who does not work until he gets a kick by his father or does not face slippers thrown by his mother.

I went to bus stand and waited for long for the bus to arrive but I think the bus got stuck somewhere just like ice cream gets stuck in its cone. I looked at my wrist watch over and over to see the time, dying to catch the bus. Every second was making me shiver in cold. There was no one there to take me in her arms or hug me tightly.

Suddenly, my eyes caught the opposite bus stop, exactly in front of me, around 20 meters away.

There was no one but the drops of water playing ‘freeze- run’ game on the steel chair. How my eyes could see those drops of water, 20 meters away from me? Aah!! God did not give me eyes but the telescope.  I am even great at counting the stars in the sky and I know exactly how many stars (ohkay.. just kidding) are there. Anyway, what caught my eyes were not those imaginary drops but the bag just below the chair; alone and looking for a warm hug.

I was surprised to see that fellow of mine. I was surprised on its loneliness because the bags are never alone. They are the luckiest creature of the God who are not left alone, especially when they are out of their home. They always have someone by their side, giving his or her shoulder and warm hugs to them.

Lucky bags! I am jealous.

It was the first time in my 24 years life when I saw a lonely bag. How cruel his owner could be?

May be someone forgot it.

I waited for 10 minutes, 20 minutes but neither my bus arrived nor the owner of the bag.

I remembered the announcement I listen everyday in Metro about the suspicious object. An alert asking people to report any suspicious object to authority as it could be bomb or a threat to security.

I remember, when my cell phone had got stolen last month, I came to know how responsible they are. Since then, there is a great respect in my heart for them. I salute them, even I am planning to request our honorable CM to give them Bharat Ratna as they are true Ratnas of Bharat. But the problem is that our CM deserves it more than anybody does. Doesn't he?

Finally, after waiting for a few more minutes and looking in the eyes of the lonely bag that just broke up with its owner, I crossed the road to reach that bus stand. I reached there and set down on the steel chair just above the bag and pitied the bag from the bottom of my heart. “Don’t worry, you are not alone, now stop crying… and yes… I do love you!” I told him lovingly!

I saw here and there for 20 more seconds and when I found no one but cold air, I bowed down a little on the seat acting like I was tying my shoe laces (actually behaving like, that bag belongs to me only) and took that bag. I put it down on the chair by giving a light hug.

Now it was my time to enjoy this reward!!

Yippppiiie!!! I jumped in the air but I successfully hid that because in Delhi if you smile, either you are considered insane or in love. And in both the cases, you are provided thousands of word of ‘humdardi’.

I again saw here and there, hung that bag over my shoulder and started heading towards my room. I gave up the idea to go to mother diary. It was most important for me to accompany the loneliest thing in this world rather than being selfish. After all there is social responsibility of all of us. Even when people run from that responsibility, I can never run. Never.

On the way to my room, I looked back for a moment again to see whether someone is watching me or following me because here policemen may not do anything substantial but they watch everything.

Thankfully, no one was looking at me and no one was following except a street dog.

Finally, I reached home, opened my door and then locked it from inside. I did not want any partner in the jackpot I just hit. After all it was only me who gave company to bag, wiped its tears of loneliness, and gave it hope that somewhere humanity does exist.

I was very happy; finally, I was going to be 'Ameer'!!

I put the bag on the table, took a chair and raised my hands for a small prayer. I prayed to God, thanked him for this gift.

I looked at the bag which was looking directly in my eyes, waiting for my gaze inside its naked body.

I took a long breath and slowly- slowly unzipped it.

There were bundles of….

Wow! What a surprise! Indian government banned Maggi and now I hit jackpot and got a stock of Maggi.

I was now the happiest student of India.

Then another moment, my eyes fell on a piece of paper inside the bag. I used my telescopic eyes to read,

It was written all over the paper.

I tried to remove that stupid paper from bag but it was pasted so toughly inside the bag.

I shook my hand tightly when I saw a bomb just below the paper and then within a nano second a big sound echoed.

My mom splashed a bucket full of water on me and I woke up from my dream. May be it was God’s way of telling me, “Maggi kills. Eat healthy… live healthy…!”