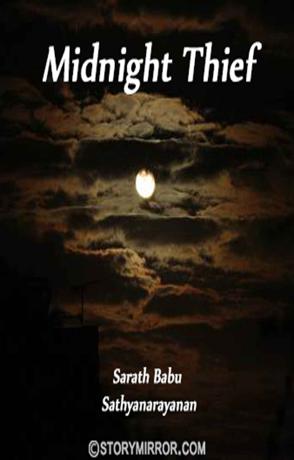 "Hello, Darling!" was the voice heard by Param from his back. When he turned he saw his wife Latha standing behind.

Latha said "Today being an auspicious day, I had prepared some sweets and since you are suffering from diabetes, I have hidden them. I am leaving to the temple and shall be back soon."

As soon as she disappeared, Param started searching for the sweets. he searched everywhere but he could not find them. Pram was dejected now. Latha came back in the meanwhile and on seeing her husband she said "Did you search for the sweets? I have kept it in the Almirah."

Param felt silly for not able to lay his hands on the sweets.

It was night already. Param received a call from his friend and he had to leave his house for some work as requested by his friend. The Clock now showed 10:30 P.M. and Latha was in deep sleep.

Soon thereafter there was some noise in the kitchen. Though Latha was terrified because of the absence of her husband, since she had learned Karate, she was bold enough to enter the kitchen and without switching on the lights,had beaten the figure until she heard a familiar voice which was of her husband. When the lights were switched on, she saw her husband standing in front of her.

Param confessed that it was him who asked his friend to call him purposely and in the pretext of going out, he came back as soon as Latha was in deep asleep.

"Unfortunately," he said, "some utensils had fallen down and you came and took me for a thief. I never knew that you have learned Karate. Let me go to bed now."

Latha felt sorry for her husband and asked, "Darling, is it hurting?"

Param smiled and said, "Yes, it is but at least now I know that you know Karate and I need not worry about any robbers."