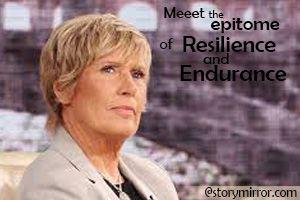 Meet The Epitome Of Resilience And Endurance
★★★★★

This is a story of a woman’s strong determination, resilience, perseverance, relentless endurance and most importantly her will power to not give-up at any cost. It is about her never-die-spirit that finally made her the winner.

Diana Nyad is an author, a motivational speaker and a long distance swimmer.

Swimming for 110 miles is no joke! It almost seems impossible but Diana was bent upon to attain this feat. But each time she tried, she would get severely sun-burnt, brutally caught up by stings of jelly fish or treacherously caught up by deceitful layers of sea. Inexorable hard work regardless of consequences, strong willpower, persistence and most significantly her mental strength finally made her achieve what seemed to be impossible.

Diana Nyad, aged 64 years has become the first woman to complete 110 miles of swim starting from Cuba up to Florida without any protection of a shark cage. She completed this remarkable achievement after quite a few years of practice and four unsuccessful attempts!

In 1975 she swam for 28 miles around Manhattan. Next was in the year 1979 when she swam for 102 miles starting from North Bimini to The Bahamas and ultimately to Juno Beach, Florida.

Her aim was to swim from Cuba to Florida for which she first attempted in 1978. She started her second attempt (with electronic “Shark Shields”) on August 7, 2011 and had to stop soon because of the rough winds and currents that diverted her off the track. She again started her third attempt (without a protective shark cage) on September 23, 2011, but unfortunately, after 41 hours of swim for about 67 nautical miles, she had to discontinue because of bluebottle’s stings, attack of jellyfish and high currents that had thrust her off the track. Diana Nyad made yet another attempt on the 18th of August, 2012, but had to withdraw once again due to two storms and stings of nine jellyfish.

Each of her attempts were altogether a different challenge because of which her team had to pull her off the waters. But attempt was also a new experience and she learnt something new every-time. Not only this, her willpower only grew stronger.

Finally, the day arrived when on the 2nd of September 2013, at the age of 64 in her fifth attempt, she accomplished her target after swimming for about 53 hours continuously!

Diana Nyad is indeed an example of extreme resilience and endurance.

There is no substitute for perseverance.

Meet The Epitome Of Resilience And Endurance