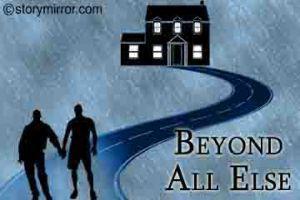 It was a furious storm outside, imitating their emotions. They had engaged in a very crucial debate. He was planning to abandon their relationship, forgetting all the five years of love, joy and bonding that they had been a part of, together. No, it was not easy for him either. It pained him to even think of living without the only love of his life. But he was also anxious about his family, their families, who, he knew, would never accept their decision. How could they? It was something that nobody would accept.

“What shall we do then?”, he asked with his eyes shining due the perennial moisture in them.

But silence was all that he was greeted with. They had to make a decision. It was a life or death situation. They both knew that neither of them would be happy without each other, even if they gave in to the demands and pressure of their families, of society.

“Let’s run away, far from here, where we will not be looked down upon, where our love will only be love, and not a crime,” he said after much thought, “because that is the only alternative left to us. Even you know how people will be, how they will react when they see us, with horror and anger. It’s not even safe here. Eloping is our only resort. Yes, we have to do it.”

With this, came the strong decision- they will tell their families about each other, about themselves. Love is love, beyond all else. What if they both were men.