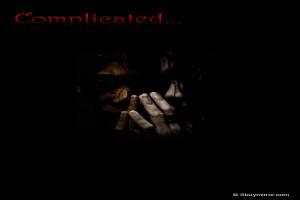 His heart pounded faster... He looked at d mirror wondering what had happened to him? To d man he was. Brown quickly shut his eyes as if to escape from reality. How did things get this complicated? This was the first time he has had such feelings.

No! This can't be real!,brown said to himself. I don't have a heart and I can't love anyone! He looked at d mirror again. His eyes said otherwise.

Alot of things ran through Brown's mind but one stood out. The sound if Carrie's laughter,the wind catching her glittering hair,her warm smile and her weird snorts. He shook his head,and pressed his chest hard as if to stop his heart from feeling.

27year old Brown Jefferson was a Gnyt that has never felt. He was typically a robot,he believed he didn't have a heart to feel but all that changed when he met Carrie.

Always wanting to be around Carrie, getting angry when another guy talks to her,always going to bed and waking up with thoughts or her. These were all signs.

Brown sighed,his heart ached. He ain't a guy that should love and least of all Carrie. She was the president's daughter and he was just her personal bodyguard. Her dad was alot strict and wanted alot of things and having a poor bodyguard as his son in-law wasn't among the 'things'.

His phone rang! Hey brownie,uain't at work today,Carrie's voice always made him smile. "Yes ma'am,ifits no stress to you. I would love to meet u to discuss something with you. I will see you at the orchard in an hour.

Carrie's heart thumped, what was Brown gonna tell her? Has he finally recognized that she really did have feelings for him? Is he going to propose to her? Is he going to wait there for her with flowers?

Pick the green dress! Katie said... You are going to see Brown right? The green dress will suit you more. Carrie had been so engrossed in her thoughts that she didn't notice her best friend come in.

She quickly put on the dress and pecked Katie to show her appreciation. Katie sat her down, styled her hair and dressed her up prettily. Everything was done. Carrie sneaked out of the house,past security and made for the orchard.

She saw brown waiting. She looked at his hand,there were no flowers. She let out a sigh and said "hey Brownie,u asked to see me"

Brown looked at her from head to toe and Carrie blushed.. "Umm,ya! I want to turn in my resignation letter to your father tomorrow. I'm leaving the country.

Carrie looked at him in shock, "u are not the type to make jokes but u are really trying hard,Brownie.

Brown shook his head,he was in pain. He could see that Carrie was hurting. He wanted to tell her the truth. But instead he said "think whatever u wanna. I have the letter with me now and I think I should just submit it today. What is she doing? Why is coming close to me? Brown thought. The space between them was reduced in a split second. Carrie removed her one of her shoes and descended on him. Brown moved an inch,He allowed her hit him with her shoe. He wasn't in pain because of d bruises she was inflicting on him but because of the pain in her heart.

"Why are you so mean? Is it that much of a crime that I'm in love with a 27year old guy? Why do you always make me look like a fool? She sobbed.

Brown could no longer take it anymore. He hugged her and kissed her. Carrie felt like her heart was going to explode. This wasn't her first kiss but she had never felt this kind of emotions before. For brown,it was all new to him! He stopped. "I don't have feelings,Carrie. I'm a guy without feelings but this is different! I'm in love with you! I'm not in control of my feelings anymore.

Carrie pinched herself to check if it was all a dream but it wasn't. "I love you so much Brownie.. I know u are way older than me but I really want to be with you! She screamed.

" But....but your parents. They will never agree to this!" Brownie said in a sad tone

Carrie stroked his hair, "do I look like I care? I care only about you. I want to be with you forever. We will get through this".

Brown smiled again..."i know we will' but deep inside of him. He knew it was going to be really difficult.

He said to himself.."I came here to tell her about my resignation but I guess things just got alot more COMPLICATED"