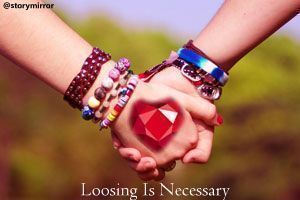 Have you ever thought why do you have to loose something to get something?? No?? Even I didn't.

But today this question did trigger my mind as to why is this necessary? Is it some kind of tradition? As I was thinking about this, my mother entered the room with a bowl of hot soup in her hand. I did not want to waste my time in drinking the soup but my mother said to drink it fast as it would help me in my story. She sat beside me.

I asked her the same question and her answer was not a simple answer. She told me a story...

Sid read this message around 4 pm. He did want to meet his best friend but he was just not in mood. He went through a tragic incident. He lost his mother last week and since then he was almost into depression. His mother was the only person in his life whom he was attached to, with whom he used to share each and every detail of his life. But now, he even forgot to smile.

The clock turned to 7. Sid thought of going to CCD but something stopped him and it was his mood. But suddenley, there was a bang on the door. His best friend Ajay was standing on the door. " Open you moody guy! I know why you didn't come. Open! ", Ajay shouted.

They both sat and had a very depressing conversation near the fireplace. " I know bro, it is sad.", said Ajay. " Now I even don't like to step out of my house ", said Sid. " No, get up. Let's go out and get some fresh air. I bet you'll feel better. " Ajay was now in a course of thoughts of how to get the smile on his buddy's face.

They both were eating Chowmine and then two girls arrived at the same place. It was Neha and Arti, their old friends. All of them were having a light hearted discussion but Sid noticed some kind of sadness on Neha's face. He thought of talking to her in isolation. She agreed. He got to know that recently she lost her pet dog. He could connect with her as both of them had lost their dear ones.

He consoled her and changed the topic so that she could feel better.

With the passage of time, Neha and Sid became good friends. One day Ajay said something strange and at that moment Sid could not accept it but that was reality. Sid was in love with Neha.

After sometime he confessed his feelings to Neha and she accepted it as even she had feelings in her heart for him.

As the story ended I realised that in this world nothing is free. We can't get anything without loosing something.