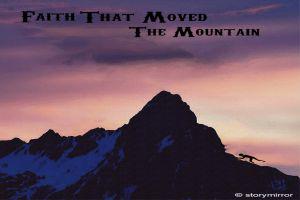 Faith That Moved The Mountain
★★★★★

Dashrath was a poor fellow who lived in a small village called Atri in Bihar. Atri was a rural area with the poorest of poor people struggling for their lives each day. The word “civilization” did not exist there.

Dashrath worked as an agricultural labourer on the other side of the village to earn his living. What was more difficult was the fact that he had to cross a tall mountain of 300 feet each day to work in the fields. For his mid-meal, his wife Phaguni had to go through the same treacherous trek to deliver him the food. She would start before noon and by the time she reached Dashrath, she was tired and often hurt. Though difficult, life was moving with its own pace as each day Dashrath would wait for Phaguni to arrive.

One day it so happened that Phaguni did not come. Dashrath was hungry and worried too. Hours passed by when he saw Phaguni limp towards him with her eyes full of tears. She explained to him how she had slipped over a loose rock and had fallen several feet down. She told him that the harsh sun almost blinded her eyes and she took a while before she could get up to reach him. Her water pot had also shattered and her leg was badly wounded.

Dashrath felt very sorry for what he saw. He decided to pave a way by cutting the mountain. He left his job and purchased a hammer, crowbar and a chisel to cut the mountain. His family went without food and Phaguni fell sick.

Dashrath thought to take his wife to see a doctor. But the doctor was 75 kilometers away over the other side of the mountain. Phaguni died on the way. Her death only spurred him on. Carving the way became his sole purpose to live. He worked for 22 long years and the world was in for a surprise. Dashrath had conquered the mountain! The paved road was 30 feet wide and 360 feet long.

The doctor, school and job were only 5 km away now. And this landless, outcast was now called “Baba.” Dashrath Manjhi was now a revered man who had not only won the battle but several hearts too. On 17th of August 2007, he lost his battle with cancer and left for heavenly abode.

Dashrath Manjhi is a real life hero who has inspired and touched our hearts. His legacy is here to stay on. Dashrath has taught us that your own faith can help you achieve what you desire... even a mountain!

Faith That Moved The Mountain