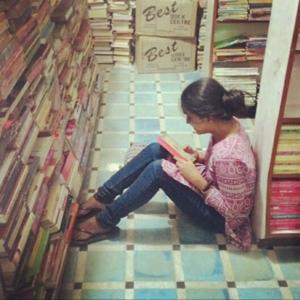 It was the meeting. He did not stop because of the meeting. He slowed the car, the brand new Verna, and rolled down the window. Curiosity always killed the cat. As the hot air hit him (the air conditioned interiors had closed him to his surroundings), in wafted a very repulsive smell, something very human. Sweat and blood. A man walked over to him, the movement momentarily distracting him from the body lying on the road. He looked twenty, well dressed but the blots of crimson on his shirt caught the eye. Frantic, with short breaths, he emerged out of my dream. I can still hear him asking, no, begging, for a ride to the hospital. But I don’t stop. No amount of scrutiny, no amount of contemplation can reveal to me the root of my actions. Apathy? Has the world made me this indifferent to a fellow human’s sufferings? Or was it just because the Verna was new? I can see the Marxist of college times laughing at me. Thoughts suddenly gush out of me -- multifarious, they jump out and stand next to the dying man. They start speaking all at once, slowly turning pale, losing out all meaning. A vain sense of shame, a desperate need to mourn, a gnawing sense of self-loathing, but somewhere in there, also a draft reasoning. There was a whole crowd there. Someone must have helped them. Or maybe they weren't really hurt (the image of the immobile body fritters in); if they were, someone would have helped them. Blind reasoning and wishful thinking -- a camouflage for ethical failing. Not love, guilt is rudimentary. Depravity is the only thing innate in us. There are cockroaches in the room. Hard to find, but I know they are there. They remain hidden in the daylight. But they are out at night. Like now. I can feel them. The clicking of their antennae, a slight flutter of the wings. They are slowly making their way towards me. The phantoms of a million pests running up and down my sweat drenched body. I can feel them -- now on the arm, now on the nape. A tingling sensation, but a cursory brush makes me question the reliability of my own sense organs. The heat, the tee sticking on to my belly, the spectres of thin antennae prodding my skin. I’d never realized how gross nights were. The twenty-year old with the blood splatters is laughing at me now. This is getting hard. The cinders have turned into sparks, from sparks to flames, and the fire is raging. With a desperate desire to atone, I reach out for the gun. A new video was trending on YouTube. “Shocking -- Road Accident Social Experiment”